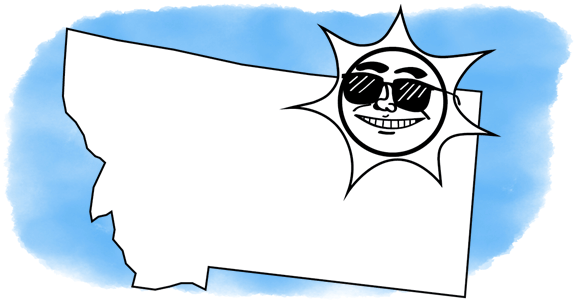 Going solar? Good call. It’s the right choice for your pocketbook and for the climate. If everyone in Montana used solar power, it would take 36 billion pounds of carbon out of the atmosphere every year—according to the EPA’s greenhouse gas calculator, that’s the equivalent of planting a forest that would cover 14% of the state.

Solar power is a growing part of the energy mix in Montana. Nationally, the state ranks #33 in solar energy use.

The biggest advantage of solar energy? The cost—$0. For the average Montana household, generating all their own electricity with solar would save $1,043/year. Also, you’re doing a favor for the next generation. Instead of relying on CO2-spewing coal plants, which produce most of Montana’s electricity, you’ll be producing your own clean, renewable energy. In Montana, residential customers like you account for 21.5% of the state’s total energy consumption.

The average Montana family uses 28,467 watts of energy on an average day. But how much sun they’ll get to generate that energy depends on where in the state they live. Folks in Billings get 5.5 hours of sun per day, on average. But Missoula gets only 3.5 hours of sun on the average day. So while a Missoula family would need to generate 8,133 watts for every hour the sun is out, a Billings family using the same amount of energy would only need enough solar panels to generate 5,176 watts/hour.

So how many panels is that? Assuming they go with 250-watt solar panels, the math is simple.

To figure out exactly what you’d need based on where you live in Montana—and how much money you’d save—use this solar savings calculator:

Montana lags behind most states in solar development, but has a solid renewable energy policy that has focused on hydro and wind power to date.

Montana’s most notable pro-solar policy is its Alternative Energy Investment Tax Credit, which is available to both business and residential projects.

Like most states, Montana has a renewable energy portfolio standard. Montana’s mandated at least a 15% renewable fuel mix by 2015, which could include solar.

Montana also, like most states, mandates net metering from its investor owned utilities. Net metering allows utilities to credit solar-producing households for energy they generate. However, Montana recently cut the rate at which net metered customers will be paid.

A 3 MW, utility scale project for Montana Power is under construction near Helena.

In June 2017, the state regulators approved a new solar project in Billings. The $20 MWh rate is lower than other contracts, making the 80 MW solar farm difficult to finance.

By the end of 2017, Cypress Creek Renewables plans to finish the Black Eagle Solar project. The facility will be in Great Falls near Black Eagle Road, and use about 35 acres of land.

In June 2017, Missoula County Public Schools Board of Trustees announced plans to build solar farms at four high schools. The schools hope to use the panels for learning if approved by the city.

The Montana Renewable Energy Association (MREA) has advocated for renewables policy and educated the public on solar since 2000.