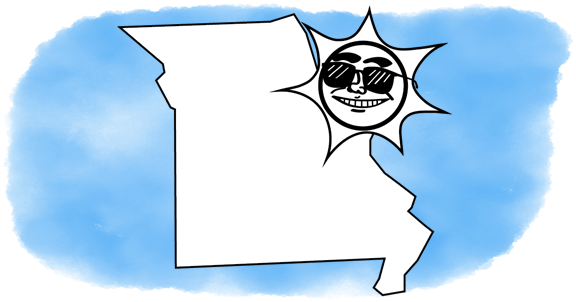 Going solar? Good call. It’s the right choice for your pocketbook and for the climate. If everyone in Missouri used solar power, it would take 158 billion pounds of carbon out of the atmosphere every year—according to the EPA’s greenhouse gas calculator, that’s the equivalent of planting a forest that would cover all of the state.

Solar power is a growing part of the energy mix in Missouri. Nationally, the state ranks #26 in solar energy use.

The biggest advantage of solar energy? The cost—$0. For the average Missouri household, generating all their own electricity with solar would save $1,398/year. Also, you’re doing a favor for the next generation. Instead of relying on CO2-spewing coal plants, which produce most of Missouri’s electricity, you’ll be producing your own clean, renewable energy. In Missouri, residential customers like you account for 29.4% of the state’s total energy consumption.

The disadvantages: The cost of installation. The average solar installation costs around $20,000. Incentives like Missouri’s personal income tax deduction for energy efficiency upgrades, which can total as much as $2,000, and the U.S. Residential Renewable Energy Tax Credit can bring the overall cost down, over time.

The average Missouri family uses 36,500 watts of energy on an average day. And, on average, they’ll get 4.75 hours of sweet Missouri sun each day. So, to get enough energy to keep the power running all night, they’ll need their solar power array to generate 7,684 watts of energy per hour while the sun’s out.

To figure out exactly what you’d need based on where you live in Missouri—and how much money you’d save—use this solar savings calculator:

Missouri has strong potential as a solar generator, and is aggressively developing its solar capacity—it already ranks 19th in solar capacity.

Missouri is one of the many states that offer net metering. With net metering, homeowners who generate solar power get all the energy they produce deducted from their electric bill. The policy was implemented as part of the Easy Connection Act of 2007.

The state also offers an income tax deduction for any home energy efficiency efforts, which can include solar panel installation.

The state passed a Comprehensive State Energy Plan in 2015, which encourages the development of renewables like solar.

Missouri just began work on a solar roadway in Conway, which will be the first public solar roadway in the United States. Solar panels will be installed to replace a sidewalk adjacent to the town’s Route 66 Welcome Center. The project is a pilot of a proposal to replace Missouri highways’ asphalt with solar panels, which would provide renewable energy, generate revenue for road repairs, and melt snow and ice accumulation.

Missouri University of Science and Technology entered a car in the American Solar Challenge, a race that showcases solar electric vehicle technology. The car placed fourth out of twenty-three and won Best Solar Array and Best Electrical design.

A vacant lot outside of Nixa will soon become the largest solar farm in Missouri. The project has been delayed for a few years, but is expected to come online in early 2017. The farm is expected to generate up to 10% of the town’s electricity. In June 2017, construction of the solar project for Nixa began near Mount Vernon Street in the city of Nixa.

In June 2017, the city of Northland welcomed its first solar powered food truck. The food truck is ran by Mudbug Mobile Madness and serves Cajun food.

In April 2017, MC Power Company will begin building a 3.2 MW solar project in Chillicothe. The solar farm will be able to generate enough solar energy for 300 homes.

Renew Missouri is a renewable energy advocacy group that advocated for the Easy Connection Act. It continues to advocate for net metering, which is beginning to face concerted opposition from utilities, as in Maine and other states.

Missouri also has its own chapter of the Solar Energy Industries Association, MOSEIA. The group lobbies for the solar industry at the state level.

The Missouri Energy Initiative concluded in a 2015 study that net metering keeps costs down grid-wide, despite utility companies’ claims to the contrary.