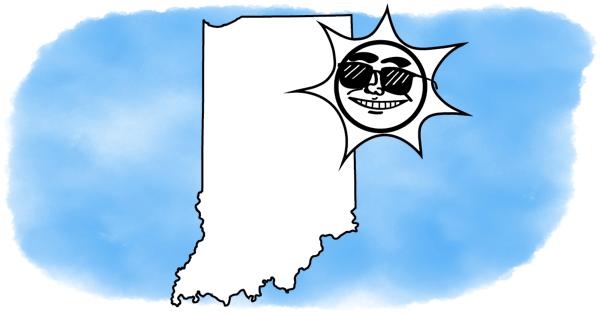 Going solar? Good call. It’s the right choice for your pocketbook and for the climate. If everyone in Indiana used solar power, it would take 219 billion pounds of carbon out of the atmosphere every year—according to the EPA’s greenhouse gas calculator, that’s the equivalent of planting a forest that would cover an area more than three times the size of the state.

Solar power is not yet a big part of the energy mix in Indiana. Nationally, the state ranks #39 in solar energy use.

The biggest advantage of solar energy? The cost—$0. For the average Indiana household, generating all their own electricity with solar would save $1,387/year. Also, you’re doing a favor for the next generation. Instead of relying on CO2-spewing coal plants, which produce most of Indiana’s electricity, you’ll be producing your own clean, renewable energy. In Indiana, residential customers like you account for 19.9% of the state’s total energy consumption.

The disadvantages: The cost of installation. The average solar installation costs around $20,000. Incentives like the U.S. Residential Renewable Energy Tax Credit can bring the overall cost down. In Indiana, some solar electricity components are exempt from sales tax, and won’t increase your property taxes. If you live in Indianapolis, you may be able to get reduced fees on building permits for energy efficiency upgrades.

The average Indiana family uses 33,633 watts of energy on an average day. And, on average, they’ll get 4.5 hours of sweet Indiana sun each day. So, to get enough energy to keep the power running all night, they’ll need their solar power array to generate 7,474 watts of energy per hour while the sun’s out.

To figure out exactly what you’d need based on where you live in Indiana—and how much money you’d save—use this solar savings calculator:

Indiana is highly dependent on coal energy and has a large coal extraction industry. The state lags behind peers in developing solar and other renewables, and its state government has only made token efforts to expand the renewable energy industry.

Indiana has enacted a renewable energy standard, but it is unambitious and toothless. The standard sets a goal of 10% renewables in its mix by 2025, and compliance on the part of utilities is voluntary.

Indiana does have decent, though modest, incentives for rooftop solar installation. Renewable energy upgrades are exempt from property tax and sales tax. Businesses, local governments, and NGOs can submit bids to a $700,000 grant program for solar projects.

A recent academic study suggested that Indiana could cost-effectively retrain its large coal extraction workforce into a skilled workforce in the solar industry.

An Indiana utility inaugurated its newest of three solar plants in 2016. The plant can generate up to 5 MW of electricity.

In May 2017, US Navy’s Support Activity announced that Duke Energy completed a 17 MW solar energy facility near Bloomington.

In May 2017, Hamilton County announced the possible installment of solar panels on top of a jail there. The project would cost $8 million, but is expected to produce enough solar energy for 50 homes.

InREA, the Indiana Renewable Energy Association, is an NGO that “focuses on service and public education.”

SIREN, the Solar Indiana Renewable Energy Network, educates the public on the possibilities of solar power.