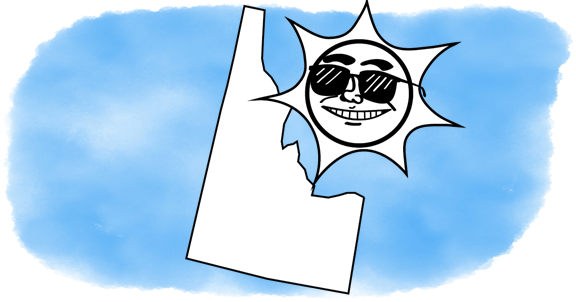 Going solar? Good call. It’s the right choice for your pocketbook and for the climate. If everyone in Idaho used solar power, it would take 2 billion pounds of carbon out of the atmosphere every year—according to the EPA’s greenhouse gas calculator, that’s the equivalent of planting a forest that would cover 658,000 acres of the state.

Solar power is not yet a big part of the energy mix in Idaho. Nationally, the state ranks #35 in solar energy use.

The biggest advantage of solar energy? The cost—$0. For the average Idaho household, generating all their own electricity with solar would save $1,146/year. Also, you’re doing a favor for the next generation. Instead of relying on habitat-destroying hydroelectric power dams, which produce most of Idaho’s electricity, you’ll be producing your own clean, renewable energy. In Idaho, residential customers like you account for 23.1% of the state’s total energy consumption.

The disadvantages: The cost of installation. The average solar installation costs around $20,000. Incentives like the U.S. Residential Renewable Energy Tax Credit can bring the overall cost down. If you go solar in Idaho you can also take a substantial income tax deduction to offset the cost of the project.

The average Idaho family uses 32,733 watts of energy on an average day. And, on average, they’ll get 4.5 hours of sweet Idaho sun each day. So, to get enough energy to keep the power running all night, they’ll need their solar power array to generate 7,274 watts of energy per hour while the sun’s out.

To figure out exactly what you’d need based on where you live in Idaho—and how much money you’d save—use this solar savings calculator:

Idaho ranks low in solar energy due to its highly advanced hydroelectric and wind power sectors; its electricity rates are third lowest in the country. Most U.S. states rely on fossil fuels to produce electricity, making solar not only cleaner but much cheaper as well. Not so in Idaho. However, if the sunny state increased its incentives package for solar installation, it could reduce its reliance on fossil fuels from 18% of its power mix to 0%.

Idaho is one of the few states that does not mandate net metering from its utilities, though three investor backed utilities have implemented their own net metering policy. Idaho also does not automatically grant solar easements, though it does allow them.

Idaho provided decent financial incentives to install solar. Installers can deduct up to 40% of the cost of the system from their income tax the year it is installed, and an additional 20% of the cost per year for the first three years after installation with a maximum value of $20,000. Solar installers can also qualify for State Energy Loan with 4% interest and a maximum value of $15,000. The Idaho Energy Resources Authority is authorized to issue bonds for non-utility renewable sources.

Idaho Power will generate 240 megawatts of solar power across eight separate solar farms starting with a Boise farm that began operations in 2016.

A rooftop solar drive in Blaine County resulted in 247 kW worth of installations.

In November 2016, state officials approved the first community-funded solar farm in the state, southeast of Boise.

In February 2017, a new operations center in Twin Falls was opened by Idaho Power. The building has a solar array on its roof capable of supplying energy to seven or eight average homes.

In mid-February of 2017, the Jeff Jones Town Square in Sandpoint installed a solar array with 30 panels and 5 microinverters on its walkway.

The Idaho Conservation League has advocated for rooftop solar, and has pushed for utilities like Idaho Power to invest in utility-scale solar.