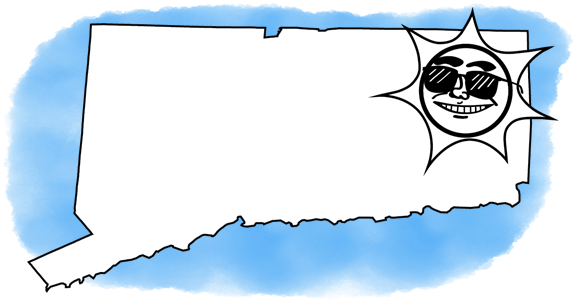 Going solar? Good call. It’s the right choice for your pocketbook and for the climate. If everyone in Connecticut used solar power, it would take 19 billion pounds of carbon out of the atmosphere every year—according to the EPA’s greenhouse gas calculator, that’s the equivalent of planting a forest that would cover an area more than twice the size of the state.

Solar power is a growing part of the energy mix in Connecticut. Nationally, the state ranks #12 in solar energy use.

The biggest advantage of solar energy? The cost—$0. For the average Connecticut household, generating all their own electricity with solar would save $1,729/year. Also, you’re doing a favor for the next generation. Instead of relying on nuclear and natural gas plants, which produce most of Connecticut’s electricity, you’ll be producing your own clean, renewable energy. In Connecticut, residential customers like you account for 33.3% of the state’s total energy consumption.

The average Connecticut family uses 24,333 watts of energy on an average day. And, on average, they’ll get 4.25 hours of sweet Connecticut sun each day. So, to get enough energy to keep the power running all night, they’ll need their solar power array to generate 5,725 watts of energy per hour while the sun’s out.

To figure out exactly what you’d need based on where you live in Connecticut—and how much money you’d save—use this solar savings calculator:

Connecticut is a small state, but it is aggressively pursuing ambitious clean energy policies through innovative public policy, like the Connecticut Green Bank, and ranks 14th in solar electric capacity. Like most of the Northeast, it has very high energy costs and consumption, making solar a cost-effective part of its energy portfolio.

The state’s Renewables Portfolio Standard requires that all utilities operating in the state generate 23% of their power using renewable generation such as solar by 2020.

In 2012, the Connecticut Green Bank created a $10 million Residential Solar Investment Program. The program subsidizes the operation and installation of new solar systems through rebates with the goal of bringing 50mw of generating capacity online by 2022. Solar loan and lease programs are also active in the state.

Connecticut is one of the many states that mandates net metering by its utilities. Net metering pays solar-generating homeowners for the energy they make. Whatever they use is credited to their bill, and they get a rebate for energy they send back to the grid. Uniquely, Connecticut allows small solar operators to have several “beneficial accounts” to which they can provide additional electricity and still be eligible for net metering.

By the end of 2017, Bright Plain Renewable Energy and D. E. Shaw Renewable Investments LLC will finish a solar energy project, the facility will provide 20 MW of solar energy to Sprague, Connecticut.

In April 2017, GRID Alternatives, a non-profit solar company, announced they are going to install a 52 kW solar energy system on an apartment building in Norwalk, Connecticut.

In June 2017, construction for a 30 acre solar farm in Griswald will begin, the farm will bring solar energy to at least 1,200 homes.

The Connecticut Green Bank is a quasi-government organization that seeds solar projects and invests in the development of solar technology.

Solar Connecticut operates a newsletter and puts on events to network solar industry players and inform the public about the benefits of solar and programs that produce it.