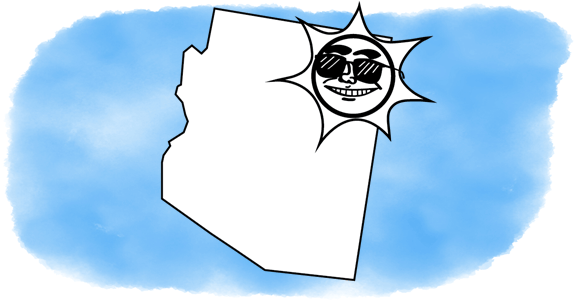 Going solar? Good call. It’s the right choice for your pocketbook and for the climate. If everyone in Arizona used solar power, it would take 117 billion pounds of carbon out of the atmosphere every year—according to the EPA’s greenhouse gas calculator, that’s the equivalent of planting a forest that would cover nearly two-thirds of the state.

Solar power is a big part of the energy mix in Arizona. Nationally, the state ranks #3 in solar energy use.

The biggest advantage of solar energy? The cost—$0. For the average Arizona household, generating all their own electricity with solar would save $1,446/year. Also, you’re doing a favor for the next generation. Instead of relying on coal, natural gas, and nuclear plants, which produce most of Arizona’s electricity, you’ll be producing your own clean, renewable energy. In Arizona, residential customers like you account for 27.2% of the state’s total energy consumption.

The disadvantages: The cost of installation. The average solar installation costs around $20,000. Incentives like Arizona’s Solar Energy Credit, which allows homeowners to deduct up to $1,000 off their property tax the year they install solar, and the U.S. Residential Renewable Energy Tax Credit can bring the overall cost down.

The average Arizona family uses 33,767 watts of energy on an average day. And, on average, they’ll get 4.75 hours of sweet Arizona sun each day. So, to get enough energy to keep the power running all night, they’ll need their solar power array to generate 7,109 watts of energy per hour while the sun’s out.

To figure out exactly what you’d need based on where you live in Arizona—and how much money you’d save—use this solar savings calculator:

Arizona is a leader in the solar industry and produces a great deal of solar power due to its abundance of desert sun. Its state government has ample incentives for solar installation and generation, but those incentives and their beneficiaries face sustained challenges mounted by the traditional utility industry and their political surrogates.

Until recently, Arizona, mandated net metering by its utilities. Net metering gives homeowners added financial incentive to go solar, by requiring utilities to pay them for the energy they generate. Homeowners who generate power from solar energy get credits for solar power they use, and rebates for electricity they send back to the grid. But net metering is now curtailed, in part because of aggressive lobbying by big utilities. Small scale solar in Arizona had become so widespread that utility-scale generation from other sources was less profitable.

In December 2016, state utility regulators voted to stop net metering for new solar installations. Rather than reimbursing solar customers at the retail price of electricity for what they generate, reimbursement will instead be based on what utilities say they save by not having to generate electricity for customers—an amount that could solar advocates say could be 30% more. The new rules won’t affect residential customers with existing solar installations, they’ll still get net metering. But anyone considering a new installation won’t get the same benefits.

Arizona has a robust pro-solar policy. The state mandates that any property owner can install solar without unreasonable interference from covenants and homeowners’ associations. The state’s renewable energy standard, however, is modest, with just a 15% goal for renewable generation by 2025.

On 150 acres of land near Cochise, Swinerton Renewable Energy expects their “Apache Solar Project” to be completed in September 2017, the project is estimated to supply 50 MW of solar energy.

In June 2017, University of Arizona announced the beginning of a solar energy storage project on campus in Tech Park.

The City of Peoria has made steps to be more eco-friendly, beginning with energy efficient lighting and implementing a solar energy project in 13 city-owned buildings.

The Arizona Solar Center is prominent a pro-solar policy, education and advocacy group.

The Arizona branch of the Solar Energy Industries Association (SEIA) lobbies for growth in the industry and pro-solar policy measures.