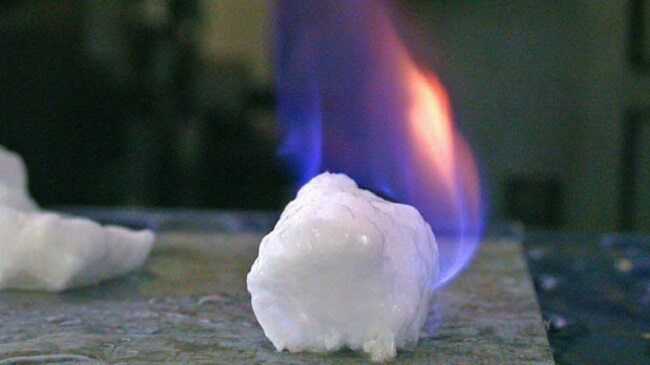 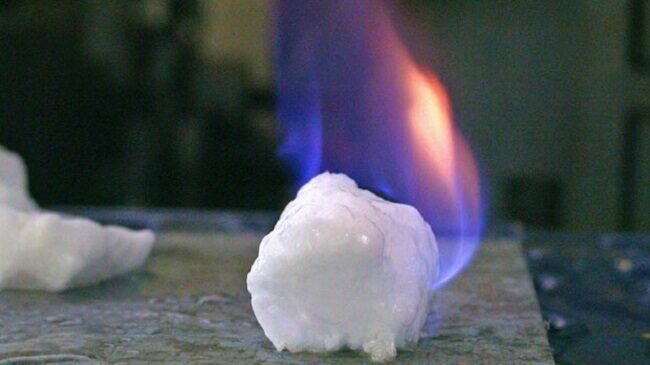 The Japanese have announced they have successfully extracted methane from a methane hydrate reservoir 30 miles off Japan’s east coast and 980 feet beneath the seafloor. They are the first to have achieved this feat. 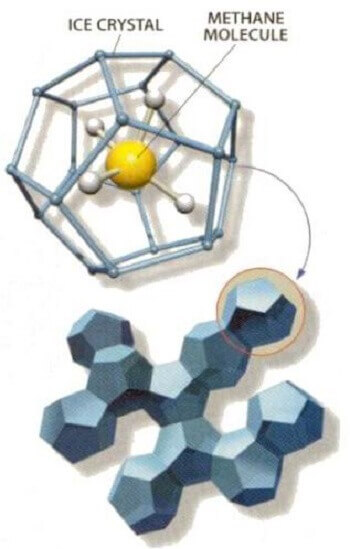 The Japanese have been attempting to extract gas hydrates, which are under and surrounding their nation in very large quantities, for years. The U.S. and India, as well as a few other nations, are also heavily invested in methane hydrate research. Many believe it is the hydrocarbon fuel source of the future. Methane is the main component of natural gas. 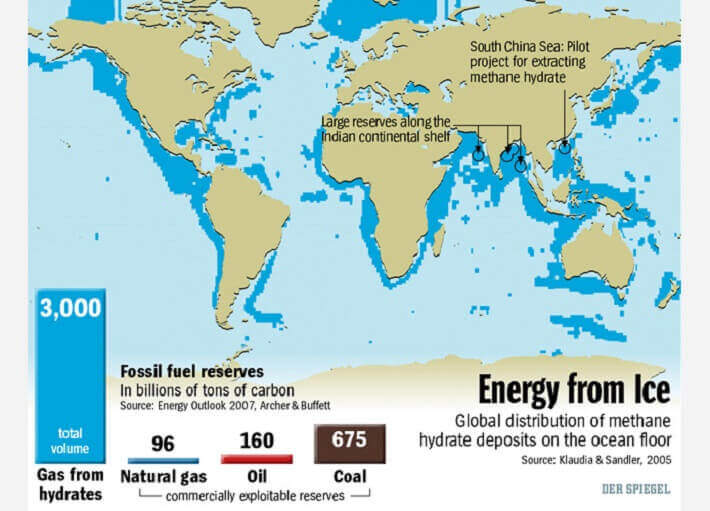 Gas hydrate deposits are worldwide, and according to the USGS, there are more hydrocarbons to be extracted from flammable ice than all the coal, oil and shale gas extracted past, present and into the future. Gas hydrates are most prevalent as sedimentary deposits along continental margins (gas migrates up from faults, hits cold water, is covered in sediment and compressed). It can also be found under Antarctica’s ice and within or beneath continuous permafrost.1&2 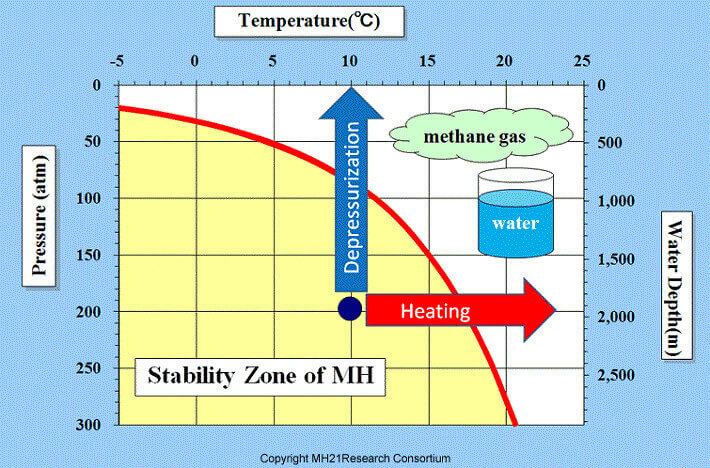 Low temperatures, a somewhat high pressure, as well as an ample supply of natural gas and water are required for gas hydrates to form. Flammable ice stays intact in temperatures above freezing as long as pressure is sufficient. To remain stable these conditions of pressure and cold must persist. 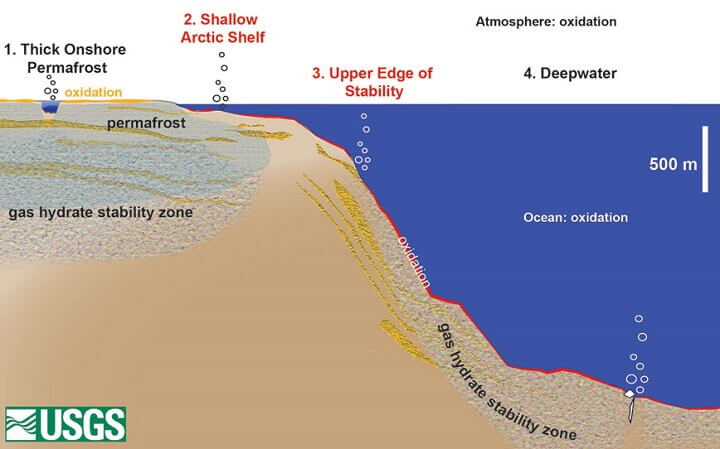 Gas hydrate deposits, near arctic coasts, will in the future be warmed by rising seas and temperatures and release their methane into the atmosphere, just as methane is escaping from below and within melting permafrost. As methane is a potent greenhouse gas approximately 25 times more potent than CO2, the question is, will this technology help or hinder. Where hydrates are susceptible to melt, will this new technology be able to soak up the methane before it reaches the atmosphere, or are many of these small pockets of methane too far apart, whereby extraction will not be economically feasible?

Gas hydrates are crystalline and take up solid space, just like solid ice. When warmed or depressurized, gas hydrates release their methane (it pops or fizzes out) and what remains is simply water, which after disassociation may easily migrate to another location. Therefore, sinkholes and instability are potential hazards surrounding spent gas hydrate reservoirs.

It is not yet public knowledge exactly how the Japanese have extracted the sub seafloor gas. Certainly depressurization was employed, along with possibly injecting the ice with a carbon dioxide/nitrogen mixture.3 If the latter is true, there might be hope for us yet, as we could (as the hopeful and ideal picture above shows) inject the carbon dioxide emissions from a shore side power plant into the gas hydrate reservoir and displace the methane, sending it up the pipe and into our gas tanks. Miraculously the hydrate stays intact as a solid, after the carbon dioxide displaces the methane, so there is no threat of collapse of the seafloor. Scientists have labeled gas hydrates a somewhat mysterious substance, for they are still learning they have more to learn.
If these ideal conditions of extraction are not met, and we are simply going to add trillions of gigatons more carbon into our atmosphere, this discovery is not a positive.  But if we replace in the near term all coal and oil (especially tar sands oil) with natural gas produced from methane hydrate, this technology would help us reduce emissions short term. The Japanese estimate they are five years away from a commercially viable product.

Yet, numerous questions need to be answered as to extraction processes, potential leakages and environmental cost. 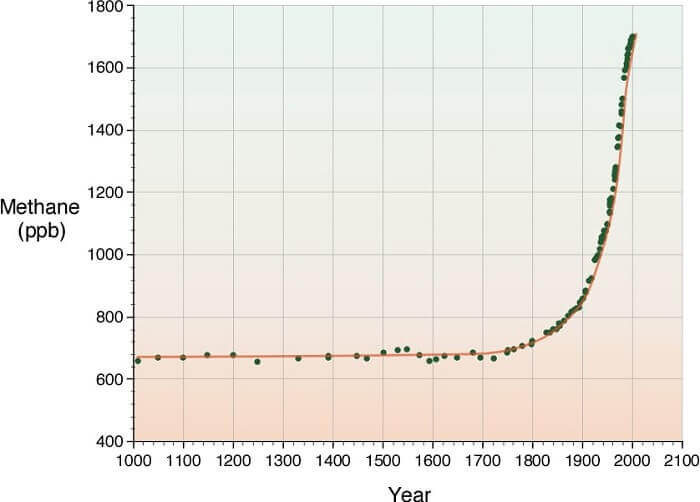 www.eoearth.org
For the past 650,000 years atmospheric methane has fluctuated between 320 to 790 ppb4, today methane is above 1758 ppb.5  According to Dr. Eric Pianka, “the sudden release of large amounts of gaseous methane from long frozen methane clathrates has been implicated in the major extinction event at the Permian-Triassic boundary 250 mya. As many as 96% of all marine species and 70% of terrestrial vertebrates died out then.”6  Methane has a global warming potential of 62 over 20 years and 21 over 100 years. 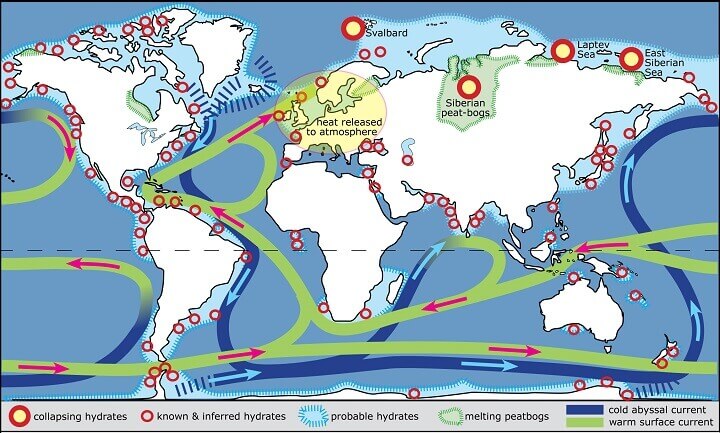 According to the USGS an estimated 99 percent of gas hydrates are in ocean sediment, with only 1 percent in permafrost areas. Methane ice has a very high concentration of methane. If you melt a 1 cubic meter block of methane hydrate, you will release about 160 cubic meters of methane gas.4* Methane when burned, breaks down into one carbon and two water molecules, both powerful greenhouse gases.

This USGS video shows how methane pops and fizzles out of the ice and at minute four, the ice is lit on fire.

Many of us first heard of methane hydrates when told that the containment dome placed over the Gulf BP spill drill site became buoyant and would not stay in place over the well due to rising methane hydrates.

* [One litre of methane clathrate solid contains, on average, 168 litres of methane gas (at STP). wikipedia