Whether it’s on a job site or in your home, there are many kinds of caulking, insulation and sealant projects that take an excessive amount of time to complete due to long drying times. Often times a heat gun allows for a project to be completed in one day, rather than two or three.

Everyone could use some extra time on their hands, and owning an effective heat gun can help you have just that.

There are many different kinds of construction chemicals, all with different flash points and reactions to heat. A heat gun with a temperature control gauge will allow you to know exactly how hot the output is, and how certain chemicals will react to it.

Controlling your gun’s temperature output will also aid in the effort to preserve and protect surrounding materials in your work area.

Get A Heat Gun With Attachments

It’s not mandatory, but a heat gun that comes with an assortment of head attachments is handy for added control. They will also aid in the protection of surrounding materials, especially those that are sensitive to intense heat.

Your heat gun can reach extremely hot temperatures. As a failsafe, get a gun with an overload shut off to protect against coil burn up, or from the entire gun overheating and breaking. This feature will save your gun, and even your home, from a fire.

The Best Heat Guns On Amazon 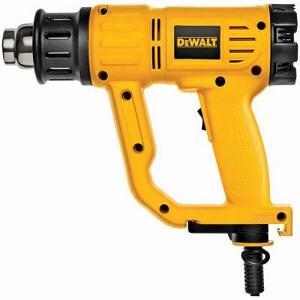 This is a moderately priced gun with a built-in temperature gauge for precise heat control.

It also has internal overload protection to save the element and avoid burning up. It has a built-in stand to keep the unit from tipping over. This gun also comes with a cone and fishtail surface nozzle for heat control. The Dewalt is a popular model for pros and handymen and women alike. 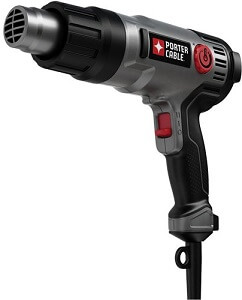 This is a cheaper option that delivers in heat adjustment and safety. Keep in mind that this gun has different fan settings to intensify or lessen heat intensity.

This gun also has a handless support bar to avoid hand and arm fatigue during long applications. This is the most affordable option around and is a reliable heat gun that should last you for a while. 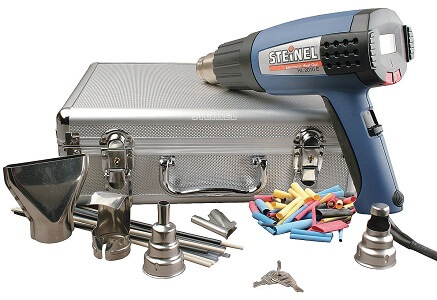 Steinel makes high-quality heat guns that will last for years. Besides all the design and safety features listed above, this gun also features an LCD screen and an element enclosed in ceramic to extend the coil life.

This product also comes with all the attachments you need and a nifty carrying case. If you plan on using a functional and diverse heat gun often, this is the one for you. 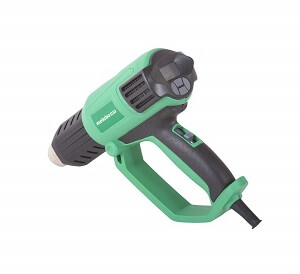 This Metabo (formerly Hitachi) is light and powerful and allows you to control your temperature up to 125 degrees Fahrenheit. The gun comes with five accessories; the glass protection attachment is especially useful to avoid a costly mistake.

Hitachi goes out of their way to make high-quality, specialty products. This gun is light, compact, and easy to store.