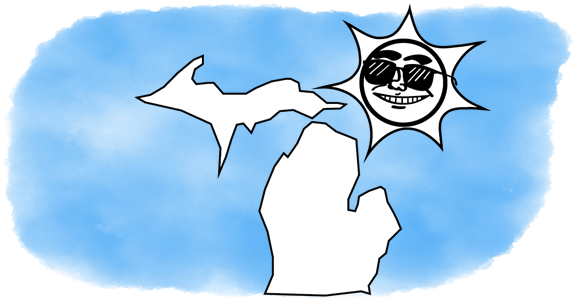 Going solar? Good call. It’s the right choice for your pocketbook and for the climate. If everyone in Michigan used solar power, it would take 142 billion pounds of carbon out of the atmosphere every year—according to the EPA’s greenhouse gas calculator, that’s the equivalent of planting a forest that would cover all of the state.

Solar power is a growing part of the energy mix in Michigan. Nationally, the state ranks #30 in solar energy use.

The biggest advantage of solar energy? The cost—$0. For the average Michigan household, generating all their own electricity with solar would save $1,134/year. Also, you’re doing a favor for the next generation. Instead of relying on CO2-spewing coal plants, which produce most of Michigan’s electricity, you’ll be producing your own clean, renewable energy. In Michigan, residential customers like you account for 27.3% of the state’s total energy consumption.

The disadvantages: The cost of installation. The average solar installation costs around $20,000. Incentives like the U.S. Residential Renewable Energy Tax Credit can bring the overall cost down. Michigan also offers a loan program, Lean & Green Michigan, through which homeowners can borrow as much as $30,000 toward the cost of installing solar.

The average Michigan family uses 21,800 watts of energy on an average day. And, on average, they’ll get 3.75 hours of sweet Michigan sun each day. So, to get enough energy to keep the power running all night, they’ll need their solar power array to generate 5,813 watts of energy per hour while the sun’s out.

To figure out exactly what you’d need based on where you live in Michigan—and how much money you’d save—use this solar savings calculator:

Michigan lags behind peer states in solar capacity, but has made serious policy strides towards expanding solar power and other renewables. As a cold and coal-dependent state, Michigan has lots to gain from embracing solar.

Michigan adopted a modest renewable energy portfolio standard in 2008: the policy requires 10% of Michigan’s electricity to be renewable by 2015. Michigan utilities are also requried to meet demand reduction targets. The state allows local governments to establish Lean and Green and PACE financing for renewable projects. State government buildings are required to increase their energy efficiency; solar is one means by which they can do so. Renewable energy programs run by governments, schools, and nonprofits are eligible for state grants.

Like most states, Michigan mandates net metering. Net metering allows utilities to credit homeowners for the solar energy they generate. Solar energy used by homeowners is deducted from their bill, and if homeowners send energy back to the grid, they get paid for it. Solar generators of up to 150 kW are eligible for net metering, until the share of net metered power reaches 0.75% of the peak demand of the utility in the previous year. Utilities are required to disclose their fuel mix to customers.

Michiganders looking to install solar panels on their property have ample help from the state. Michigan Saves is a non-profit seeded by the state that offers loans for solar installers; loans can have a value of up to $30,000. A similar program for business offers loans up to $250,000. Small businesses are also eligible for an additional loan program.

Western Michigan University began operations of a 1 MW solar plant on its campus in 2016.

In August 2016, the University of Michigan won a solar car race in the the American Solar Challenge for the sixth year in a row.

In September 2016, DTE Energy broke ground on a 10-acre solar array in West Detroit; it will be one of the largest urban solar arrays in the U.S.

In November 2016, General Motors and DTE Energy announced the completion of a 900 kilowatt solar array at GM’s Warren Transmission plant in suburban Detroit.

In March 2017, Michigan State University announced the construction of a solar carport project. The solar carports would protect cars from weather while producing 15,000 MWh a year.

In June 2017, the Clean Energy Coalition united with the city of Ann Arbor to accept a new policy encouraging renewable resources. Since the policy went into effect, 18 solar projects have begun.

In June 2017, Kalamazoo Nature Center officially unveiled their solar array. It has already saved them $10,000, and is expected to eliminate 193 tons of carbon emissions.

NextEnergy is a green technology incubator and R&D NGO located in Detroit. The group also evaluates solar and renewable projects statewide and advises the state government on renewable policy.

The Great Lakes Renewable Energy Association (GLREA) is a long time advocate for pro-solar policy in Michigan and helped establish standards for the emerging industry. The group also holds an annual Energy Fair, along with other conferences. GLREA advocates for pro-solar policy at the state level.