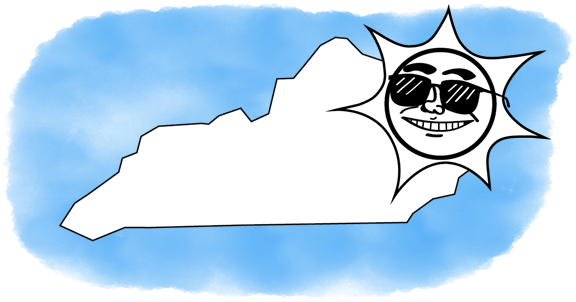 Going solar? Good call. It’s the right choice for your pocketbook and for the climate. If everyone in Kentucky used solar power, it would take 187 billion pounds of carbon out of the atmosphere every year—according to the EPA’s greenhouse gas calculator, that’s the equivalent of planting a forest that would cover an area more than twice the size of the state.

Solar power is a growing part of the energy mix in Kentucky. Nationally, the state ranks #36 in solar energy use.

The biggest advantage of solar energy? The cost—$0. For the average Kentucky household, generating all their own electricity with solar would save $1,436/year. Also, you’re doing a favor for the next generation. Instead of relying on CO2-spewing coal plants, which produce most of Kentucky’s electricity, you’ll be producing your own clean, renewable energy. In Kentucky, residential customers like you account for 22.2% of the state’s total energy consumption.

The disadvantages: The cost of installation. The average solar installation costs around $20,000. Incentives like the U.S. Residential Renewable Energy Tax Credit can bring the overall cost down. Residents of some Kentucky counties are eligible for low-interest loans to fund energy efficiency projects like solar power.

The average Kentucky family uses 39,233 watts of energy on an average day. And, on average, they’ll get 4.25 hours of sweet Kentucky sun each day. So, to get enough energy to keep the power running all night, they’ll need their solar power array to generate 9,231 watts of energy per hour while the sun’s out.

To figure out exactly what you’d need based on where you live in Kentucky—and how much money you’d save—use this solar savings calculator:

The vast majority of Kentucky energy is provided by coal—the state is a leading coal extractor. However, the state has enacted substantial laws and incentive to promote solar and other renewables.

Kentucky does not have a renewable energy portfolio standard. However, Kentucky does have robust economic incentives to promote renewable energy production and boost the renewable industry in the state. The effort is headlined by the Incentives for Energy Independence act of 2007. The state also established a Green Bank that makes loans to state and local government agencies. Local governments are also allowed to set up PACE programs.

Like most states, Kentucky mandates that its utilities provide net metering. Net metering deducts energy private solar/renewable operators have generated from the total cost of their utility bill and credits those small operators for any excess power generation that goes to the grid at large.

In Kentucky, solar easements can be obtained in writing and traded. The state’s interconnection standards are similar to most other states’.

In November 2017, 60 acres of lane in Clark County will become a solar farm. The project was initiated by a cooperative and will produce 50 kWh of solar energy.

During the middle of 2017, 7 solar projects were approved by state officials. These 7 solar arrays will each produce 30 kW of energy, and will be placed throughout Kentucky by Big Rivers Electric Corp.