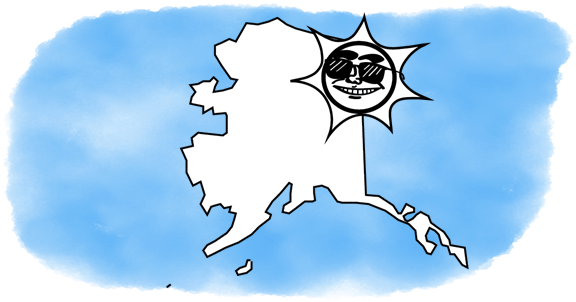 Going solar? Good call. It’s the right choice for your pocketbook and for the climate. If everyone in Alaska used solar power, it would take 8 billion pounds of carbon out of the atmosphere every year—according to the EPA’s greenhouse gas calculator, that’s the equivalent of planting a forest that would cover 2.8 million acres of the state.

Solar power is not yet a big part of the energy mix in Alaska. Nationally, the state ranks #46 in solar energy use.

The biggest advantage of solar energy? The cost—$0. For the average Alaska household, generating all their own electricity with solar would save $1,389/year. Also, you’re doing a favor for the next generation. Instead of relying on natural gas plants, supplied by fracking and offshore drilling, which produce most of Alaska’s electricity, you’ll be producing your own clean, renewable energy. In Alaska, residential customers like you account for 7.9% of the state’s total energy consumption.

The disadvantages: The cost of installation. The average solar installation costs around $20,000. Incentives like the U.S. Residential Renewable Energy Tax Credit can bring the overall cost down. Your solar system may also be exempt from municipal taxes—Alaska law allows municipalities to pass such exemptions.

The average Alaska family uses 20,167 watts of energy on an average day. And, on average, they’ll get 4.75 hours of sweet Alaska sun each day. So, to get enough energy to keep the power running all night, they’ll need their solar power array to generate 4,246 watts of energy per hour while the sun’s out.

To figure out exactly what you’d need based on where you live in Alaska—and how much money you’d save—use this solar savings calculator:

Alaska has a small but substantial set of incentives to establish solar and renewable power generation. While the state extracts lots of fossil fuel, unlike most fossil fuel states it imports most of its energy and therefore has strong economic incentives to develop cheap, clean energy. However, efforts have been hampered by the state’s ongoing budget crisis stemming from the decline of its oil-revenue-driven trust fund.

The state of Alaska takes an active hand in energy development. Its general energy loan program for utilities, the Power Project Loan Fund, is administered by the Alaska Energy Authority, which can authorize loans up to $5 million for institutional generators on projects that include solar and other renewables.

The Alaska Energy Authority also runs a Renewable Energy Grant Program, which refers worthy solar and renewables projects to the state legislature. The program is on hold for 2017 because it has not been funded for that fiscal year.

The legislature moved in 2010 to allow local governments to exempt solar and renewable generating projects from property taxes.

Alaska allows businesses to borrow up to $50,000 from the state to develop solar projects at 5% interest as part of its Alternative Energy Conservation Loan Fund.

Alaska mandates net metering, like many states. Net metering lets homeowners get compensation for the solar energy they create. Not only can homeowners get credited on their electricity bill for solar energy they use, they can get paid for electricity they send back to the grid. Alaska’s program allows systems with a capacity of up to 25kW to participate in the program; 1.5% of a utility’s average retail demand can be credited with net metering.

In 2017, within little over a year Chugach Electric Association has announced the installation of 70 projects, this means the amount of solar projects has nearly doubled.

The village of Katzebue is testing a 26-foot Solar Hydroponic Trailer that will enable them to grow their own food, the hope is that they will be able to cut down on imported goods.

During 2017, Arctic Solar Ventures installed 86 panels on an old office building, the system is projected to save the owner $300,000 within the next 30 years, encouraging the use of solar energy in Anchorage.

Renewable Energy Alaska Project (REAP) advocates for renewable energy projects including solar on behalf of a broad range of constituents ranging from tribal groups to small businesses and utilities.

The Alaska Center advocates for clean energy development as a replacement for fossil fuel extraction in the state’s economy.