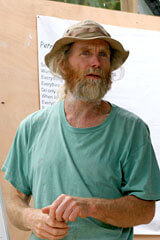 At my permaculture design course last weekend the guest speaker was Douglas Bullock, of the well-known Bullock Brothers Permaculture Homestead on Orcas Island. Douglas was lecturing on the overall topic of soil, and specifically spoke about nitrogen-fixing plants, sheet mulching, microclimates, and last but not least, orchard design and his personal fruit tree recommendations for Seattle.

He gave me permission to pass along his recommendations for fruit to plant in the Maritime Northwest, which included best of breeds for apples, plums, peaches, pears, mulberries, kiwis, hawthornes, and figs. His recommendations were heavily focused on Seattle, however all of the varieties mentioned below would be pretty good for Seattle, Portland, Tacoma, and the rest of Western Washington, Western Oregon, and similar parts of British Columbia.

He said there are few Paw Paw varieties that will ripen well in Seattle. If your goal is for good production and you don’t care about messing around with more experimental varieties, he’d recommend skipping on the Paw Paws.

He also gave a super easy guide to deciding between kiwi and grape vines based upon soil and sun:

Most of the primary issues with fruit in Seattle are made worse by excessive moisture and crowding. Douglas advises to take this into heavy consideration when planning a food forest type orchard. He recommends looking into atypical plant and tree choices to avoid issues like apple maggot, and to give your trees good space. Also, keep a blank space in your mulch around the base of the tree, or you’ll run the risk of small rodent’s chewing the base off and killing your tree.

Stayed tuned for more from Douglas’s lecture, including a quick guide to finding nitrogen fixing trees and shrubs.