The earth may be giving, but the winds and the snows often conspire to take away that which the earth gives. So, for thousands of years people have been trying to protect a patch of earth from the vagaries of the weather.

Enclosing an area and letting light in as a solution first appeared in Roman times, but was severely limited by the materials they had available. It wasn’t until glass sheets were fabricated in the 1300s that enclosing larger spaces became possible, and even then at prohibitive cost. Nonetheless, enclosing a small space and putting a few spun panes of glass over it is so useful for starting seeds early, and keeping a few selected veggies available through the winter, that the technology spread steadily from the manors of the nobility to the backyards of people of more modest means as the centuries passed.

New methods of glass production in the 19th century for the first time allowed whole rooms to be made from glass, and the advent of float glass in the mid-20th century covered over acres and acres in order to grow high value crops. Today, greenhouses are large, climate controlled, and highly regulated environments that can be enormously productive, especially when multiple methods of food production are utilized in the same space.

But even today their great expense means that they are impractical for growing all of our food, and many plants, like fruit trees and other perennials, are not well suited for the greenhouse environment.

However, as the climate begins to behave in a less predictable fashion (when was the last 7 day forecast that was accurate in your experience?) we are going to have to save our oranges from the cold and our plants from disease with an increasing frequency. Thankfully, we have available to us a much cheaper and more portable way to control the environment in a space; the hoop house, or high tunnel.

Unlike a greenhouse, a hoop house uses strong, stretchy polymers to block the wind and hold in thermal energy. While the first few generations of the design were plagued by fragility in high winds and poor weather, modern versions are in many cases stronger than their glass counterparts, due to the use of tense, UV-resistant plastics. Their cost effectiveness means that even large areas can be covered, and that even people of fairly modest means can set up a large controlled growing environment for the first time ever.

While most greenhouses are climate controlled, the goals of hoop house owners are typically not to grow tropical plants in the snowy north, but rather to extend the growing season of normal food plants through the winter, so most hoop houses only use passive heating and ventilation.

Passive does not mean ineffective, however; in a double layered hoop house (more about that later) with the use of suspended semi-transparent ‘blankets’ over the growing area, it is possible to grow greens and other low vegetables throughout the winter with, depending upon the sun, a 40-60 degree difference in the temperature between the inside and the outside!

Another major benefit of having the shelter open to the soil is that dwarf fruit tree varieties can live happily in an environment controlled enough to prevent freezing, even when it freezes in Florida and snows in San Francisco (!) while still enjoying the freedom of sinking their roots into the earth’s own soil.

Since high tunnels are usually secured by soil or stones and broken bricks piled up around the base of the shelter, rather than with a foundation, roots will not destroy the shelter if they are allowed to roam. And if a space should become contaminated with a disease, you can just move the hoop house to a clean location and let the infected zone go to seed for a few years.

This is much less of a hassle and environmental hazard than the extensive cleaning and sterilization you have to go through should your greenhouse become contaminated. In fact, plant disease is a good reason to use a hoop house all year round; since the irrigation is controlled and applied at the root, and pests are largely excluded by the enclosure, most diseases never even get the chance to start! This allows the grower to use less petroleum-based pesticides and fungicides, and it allows the plants to grow faster since they are not fighting off pests, and over time this more than makes up for the oil and energy used to create the hoop house itself.

A hoop house can be a highly productive addition to a farm, large or small, or even a home garden, but the design that you choose to build will have a large impact upon the durability, heat retention, and long term cost of the growing space. The first hoop houses got their name due to their quonset hut like design, composed of semi-circular hoops of PVC or steel held together with a central spine.

However, under snow load these structures collapse, they are often poorly ventilated in the summer, or opened outright which defeats their pest control benefits, and the plastic that was used was often not very transparent or well suited to long term use.

And PVC piping, while attractive for it’s upfront cost, ends up being a huge expensive hassle over time as it has to be replaced often. It surprises me that these designs continue to be used by many people when there is a superior design that costs only slightly more to set up; the gothic hoop house. These hoop houses have vertical walls, and peaked roofs, and as a result they have far more interior room than the quonset type.

Gothic hoops are universally composed of galvanized or stainless tube steel of a good strong diameter, and thus can last for many decades. The design is more airtight in the winter, generally, and integrates cheap peak ventilation at the ends to keep the space from becoming a steamy hell in the summer. And, even better, they handle a snow load far better than quonset style hoop houses, and require neither extensive sweeping to keep them from collapsing, nor removal of snow from between the houses except in the most extreme snowfalls.

These benefits greatly reduce the amount of work that the productive growing space demands in the winter. The best modern designs use two layers of high tensile strength plastic film, that can be expected to last between 4 to 10 years depending upon the type, with an inflated space in between. When combined with ground covers, these hoop houses can be amazingly effective at keeping out the cold without spending any money on heating at all! However, the use of two layers reduces overall light by 10% or more, and so plants that demand high light levels should be grown in single layer houses. Most plants are more warmth than light dependent for their survival, and so the sacrifice of a fraction of the light is worth it in exchange for another 6-10º F of heat.

Given the modular design of hoop houses, it may be a temptation to just build an endless hoop house that stretches from one end of a field to another. Don’t do it! It turns out that long hoop houses are terrible at holding in heat in the winter, and tend to be poorly ventilated in the summer as well. A good rule of thumb is to not exceed a width to length ratio of 1:2 in order to maximize thermal efficiency, and generally the greater the width the more efficient the space will hold heat. However, the design of the structure limits the width to around 40 feet at most, with 30 being a good, accessible width. A 30 by 60 hoop house is well served by a vent at each end of the space, and limiting the space also acts to contain epidemics, with care, to a very small portion of the plants on a large farm. If I were building a large complex of hoop houses to serve a great need for food, I would limit myself to 30×60 houses with fairly wide paths in between them. 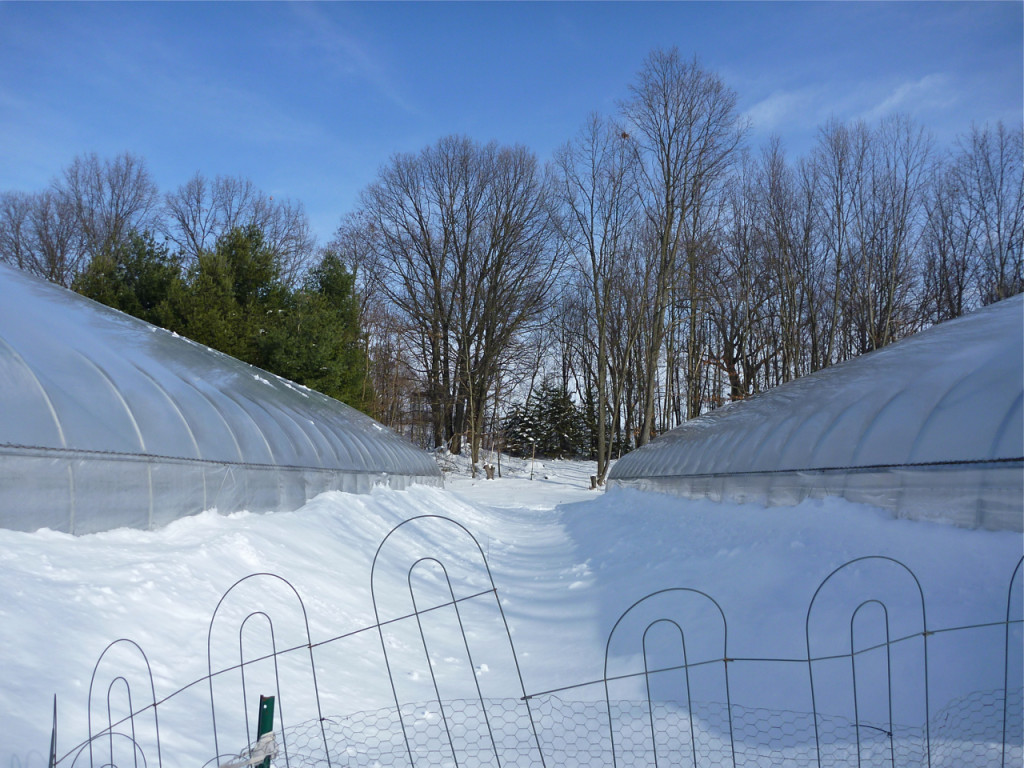 Placing the houses too close together can limit the light that the plants receive in the most productive months of the spring and summer, and promote the spread of disease via runoff, so it’s also wise to avoid placing the hoop houses in each other’s shadow. Open air crops, such as sweet corn, hay, or alfalfa, can be planted in strips between the houses if you wish; this can even act to break up a dangerous monoculture if the grower specializes in one crop inside of the shelters.

However, if you choose to do this take care. Despite their relative cheapness compared to a conventional greenhouse, running into one with your tractor will still be a costly mistake! The frame of the structure is steel, and thus is very strong and durable, but an important choice must be made when building the walls at the ends. Walls made of sheet steel or, even better, two layers of sheet steel with a space in between them, will last as long as the hoops and can be welded or bolted together into a solid unit. However, they are more expensive to both purchase and assemble than the alternatives, plywood and plastic.

Structural corrugated plastic has some of the longevity benefits of steel for less money, and even lets in some light, but it’s fragile and can be hard to work with. Plywood is the cheapest, and is a better insulator than anything but a double layer of steel, but it rots and needs regular replacement. Choose whichever meets your budget, but bear in mind that choosing wood ends comes with a greater maintenance and replacement cost over time.

Growing food in a 30″ by 60″ space represents ~5-10 hours of work a week after the initial set up, so be sure not to build beyond your ability to care for the space. However, such a hoophouse is very large for a home garden, and the productivity benefits of the structure could lead to very few trips to the grocery store and a lot of extra food to give or sell to neighbors, so the investment can pay off quite well.

And small farms can use the space to sell food to CSA’s and other locavore groups, increasing the profits from a space greatly while taking better care of the land in the process. The benefits of hoop houses to increase productivity and decrease costly inputs makes them a compelling investment even in the best of times, but in an age where unexpected shifts in the weather are spiking food prices in disruptive ways throughout the world, the use of shelters to shield our crops from the fickle weather may be critical for our success as a society.

Cross posted at The Trip for Life