A jigsaw is a powerful and versatile saw which allows you to make either straight cuts or curved ones, and it can be used on a wide variety of materials such as plywood, plastic, wood, metal, and particle board. It’s one of the easiest saws to manage, and is a very popular choice among do-it-yourselfers.

One of the most important things to know about any jigsaw is the cutting power it has, because the strongest jigsaws can cut through tougher materials, and have greater all-around appeal. When you have just one saw in your tool area that has the power to cut through anything, that might be the only saw you really need.

Cutting speed is a critical characteristic of jigsaw, because you don’t always want to operate the saw at the same speed to accomplish your cutting tasks on different materials. Jigsaws which are equipped with variable speed settings will have the versatility to cut through many different kinds of material easily, by matching the right operating speed to the material.

Some kind of guide system on your jigsaw can be a big help in keeping your cuts straight. If you can find a good jigsaw with a guide on it, you’ll make far fewer cutting mistakes, and your finished products will be more uniformly precise. 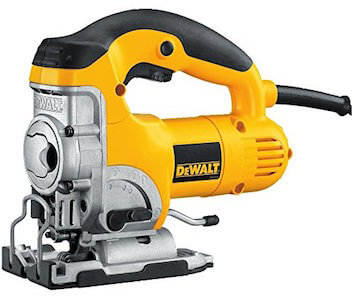 The DEWALT DW331K Top Handle Jigsaw is equipped with a powerful 6.5 amp motor, which has the kind of cutting power that can handle almost any task you take on.

Its optimal cutting speed varies between 500 and 3,100 strokes per minute, to make it the ideal saw for any application you might have in mind. 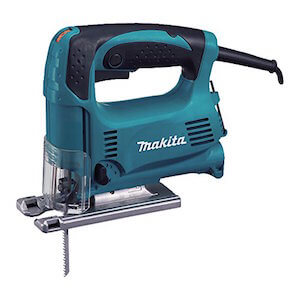 The Makita Variable-Speed Top-Handle Jigsaw a powerful 3.9 amp motor, and variable speeds between 500 and 3,100 strokes per minute so it can easily be matched to whatever task is waiting.

It comes with a large trigger switch for smooth operation and a counterweight balancing system which minimizes vibration, and saves your hands.

Its die-cast aluminum base can be adjusted in either direction by 45 degrees for optimal cutting. 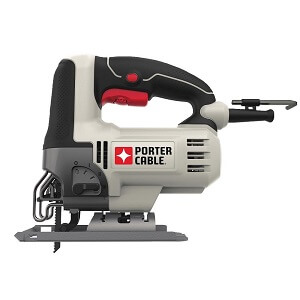 Even the toughest jobs can be handled with ease by this powerful PORTER-CABLE 6 Amp Orbital Jigsaw, and its variable speed settings go up to 3,200 strokes per minute, so you can match the speed to the task at hand.

Changing blades is a breeze with its keyless blade system, and the 4-position orbital lever allows you to achieve optimal cutting capability for whatever material is being worked. 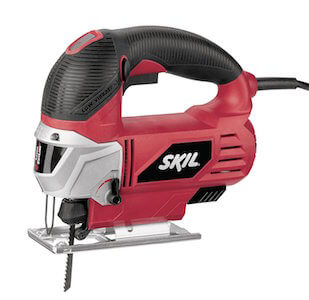 The built-in laser guide assures accuracy with this heavy-duty SKIL Orbital Action Laser Jigsaw, and the variable speed settings allow for almost any kind of task to be matched perfectly to the operating speed.

Its custom tool rest design prevents the blade from harming the material where it’s been placed, and the 4-position orbital cut control permits fast cutting as well as smooth cutting.

Amazon reviewers mention that the jigsaw is the perfect small saw that is easy to store and maintain. 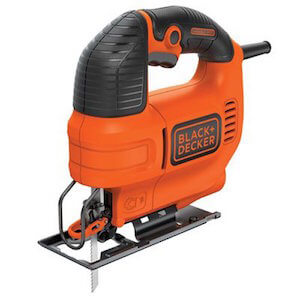 A built-in dust blower helps remove sawdust from the area where you’re working with this 4.5 amp Black & Decker BDEJS300C Jigsaw.

Bevel cuts can be achieved by tilting the base plate, which provides versatility in cutting.

For the average homeowner who uses a jigsaw occasionally, this is a viable option at a reasonable price.

Find it at Home Depot