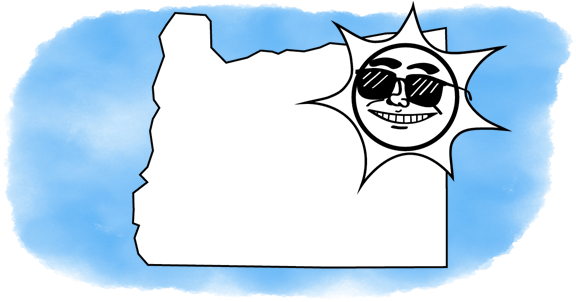 Going solar? Good call. It’s the right choice for your pocketbook and for the climate. If everyone in Oregon used solar power, it would take 16 billion pounds of carbon out of the atmosphere every year—according to the EPA’s greenhouse gas calculator, that’s the equivalent of planting a forest that would cover 10% of the state.

Solar power is a growing part of the energy mix in Oregon. Nationally, the state ranks #8 in solar energy use.

The biggest advantage of solar energy? The cost—$0. For the average Oregon household, generating all their own electricity with solar would save $1,167/year. Also, you’re doing a favor for the next generation. Instead of relying on habitat-destroying hydroelectric power dams, which produce most of Oregon’s electricity, you’ll be producing your own clean, renewable energy. In Oregon, residential customers like you account for 25.0% of the state’s total energy consumption.

The disadvantages: The cost of installation. The average solar installation costs around $20,000. Incentives like Oregon’s low-interest energy loan program and the U.S. Residential Renewable Energy Tax Credit can bring the overall cost down.

The average Oregon family uses 31,000 watts of energy on an average day. But, how much sun they get—which determines how much solar energy they can make—depends on where in Oregon they live. Folks in Bend see as many as six hours of sun per day on average. In Portland, average sun hours per day is closer to 3.5. With six hours of sun, a family in Bend will only need to generate 5,167 watts/hour of sun to meet their energy needs. But in Portland, that same family will need to generate 8,857 watts/hour of sun. The Portland family will need nearly twice as many solar panels.

Exactly how many would each family need? Assuming they go with 250-watt solar panels, the math is simple.

To figure out exactly what you’d need based on where you live in Oregon—and how much money you’d save—use this solar savings calculator:

Oregon is a leader in energy efficiency and values renewables, but is only beginning to expand its solar generation—primarily through small-scale residential projects.

Oregon has an alphabet soup of admirable renewable energy programs, including grants, tax breaks, and loans—including a target 50% statewide renewable energy production by 2040—that deserve national attention and emulation, so it’s useful here to focus on solar-specific programs, which have not historically been a priority for the state.

Oregon’s flagship solar program is run by its Energy Trust, which provides small solar operators scaled incentives worth up to $6,500 dollars in total benefits. The incentive program will begin to scale down when statewide solar energy production reaches its target level of production. However, the program will expire in 2018 unless it is expanded or modified.

The state incentivizes solar generation on the part of utilities through a modest, general enrollment statewide subsidy and a larger subsidy that must be applied for on a case-by-case basis by the generator.

The state recently approved a streamlined permitting process for new solar projects—the easy permitting process further enhances the friendly regulatory climate for solar development, which the state has considered an inherent property right since 1979, provided easements are negotiated with neighbors.

Oregon mandates net metering, like most states. Net metering deducts energy private solar/renewable operators have generated from the total cost of their utility bill and credits those small operators for any excess power generation that goes to the grid at large.

The Oregon National Guard installed 150kw solar array at an armory in Pendleton.

In March 2017, Crook County announced plans to build a solar project south of Highway 126. The solar plant will produce 56 MW of solar energy when the company SunPower is finished building it.

By the end of 2018, a large solar farm in central Oregon will be completed for Apple. The solar facility will be used to power Apple’s three data centers near Bend.

In June 2017, a the Jackson County Board of Commissioners approved a solar project near Bedford along Rossanley Drive. However, the agreement requires the solar farm to be dismantled after 30 years, for use as farmland.

Oregon, as its green reputation suggests, has a strong environmental lobby that advocates for solar power.

Environment Oregon is lobbying for 100% clean energy production in the state.

The Oregon Environmental Council was instrumental in expanding the Renewable Energy Standard and lobbies regularly for clean energy legislation.