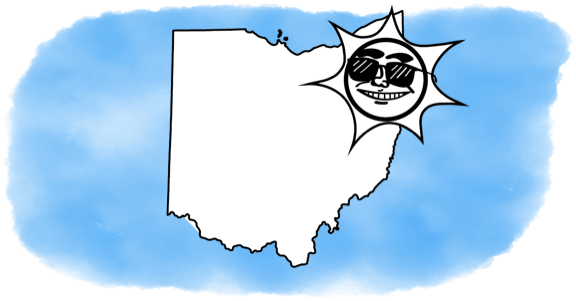 Going solar? Good call. It’s the right choice for your pocketbook and for the climate. If everyone in Ohio used solar power, it would take 210 billion pounds of carbon out of the atmosphere every year—according to the EPA’s greenhouse gas calculator, that’s the equivalent of planting a forest that would cover an area nearly three times the size of the state.

Solar power is a growing part of the energy mix in Ohio. Nationally, the state ranks #27 in solar energy use.

The biggest advantage of solar energy? The cost—$0. For the average Ohio household, generating all their own electricity with solar would save $1,351/year. Also, you’re doing a favor for the next generation. Instead of relying on CO2-spewing coal plants, which produce most of Ohio’s electricity, you’ll be producing your own clean, renewable energy. In Ohio, residential customers like you account for 24.8% of the state’s total energy consumption.

The disadvantages: The cost of installation. The average solar installation costs around $20,000. Incentives like the U.S. Residential Renewable Energy Tax Credit can bring the overall cost down. Ohio’s Energy Conservation for Ohioans offers interest rate deductions for homeowners who take out loans to fund solar power projects.

The average Ohio family uses 30,033 watts of energy on an average day. And, on average, they’ll get 4 hours of sweet Ohio sun each day. So, to get enough energy to keep the power running all night, they’ll need their solar power array to generate 7,508 watts of energy per hour while the sun’s out.

To figure out exactly what you’d need based on where you live in Ohio—and how much money you’d save—use this solar savings calculator:

Ohio is middle of the pack in solar development, like peer states Illinois and Missouri, but it has a favorable policy climate and need for solar power—most of its energy comes from coal and natural gas.

Like most states, Ohio mandates net metering. Net metering deducts energy private solar/renewable operators have generated from the total cost of their utility bill and credits those small operators for any excess power generation that goes to the grid at large.

Ohio maintains an Energy Loan Fund that provides financial assistance for all areas of energy development, including solar.

The Toledo Zoo installed a solar walkway that, along with a nearby brownfield solar site, provides 30% of the Zoo’s annual power needs.

American Electric Power, a national utility based in Ohio, announced plans to develop 400 MW of solar power starting in 2017.

A Columbus resident made his home a net zero energy user in 2013 using solar power generation and other systems.

In June 2017, Cuyahoga County Department of Sustainability announced construction on the closed Brooklyn landfill. The project will turn the empty lot into a 4 MW solar farm.

In June 2017, UpGrade Ohio announced the construction of the first solar project through Solar ACCESS. The project will be built at Federal Hocking Secondary School in Stewart.