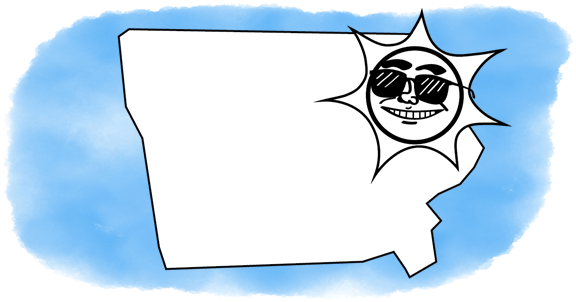 Going solar? Good call. It’s the right choice for your pocketbook and for the climate. If everyone in Iowa used solar power, it would take 79 billion pounds of carbon out of the atmosphere every year—according to the EPA’s greenhouse gas calculator, that’s the equivalent of planting a forest that would cover 83% of the state.

Solar power isn’t yet a big part of the energy mix in Iowa. Nationally, the state ranks #43 in solar energy use.

The biggest advantage of solar energy? The cost—$0. For the average Iowa household, generating all their own electricity with solar would save $1,194/year. Also, you’re doing a favor for the next generation. Instead of relying on CO2-spewing coal plants, which produce most of Iowa’s electricity, you’ll be producing your own clean, renewable energy. In Iowa, residential customers like you account for 16.4% of the state’s total energy consumption.

The disadvantages: The cost of installation. The average solar installation costs around $20,000. Incentives like the U.S. Residential Renewable Energy Tax Credit can bring the overall cost down. Iowans can also take advantage of the Alternate Energy Revolving Loan Program, which offers zero-interest loans to help finance solar projects.

The average Iowa family uses 29,700 watts of energy on an average day. And, on average, they’ll get 4.5 hours of sweet Iowa sun each day. So, to get enough energy to keep the power running all night, they’ll need their solar power array to generate 6,600 watts of energy per hour while the sun’s out.

To figure out exactly what you’d need based on where you live in Iowa—and how much money you’d save—use this solar savings calculator:

Iowa doesn’t have much solar capacity, but it has strong alternative energy policy: the state is a leading producer of wind and ethanol, and is making strides on solar.

Iowa was the first state to adopt a renewable energy standard. That law, the Alternative Energy Law (AEL), was passed in 1983 and mandates an effective 50% renewables mix. The state has begun the process of updating that law by putting in process the Iowa Energy Plan, which will give its recommendations to the state government in 2016.

Iowa, like most states, mandates net metering. Net metering gives rebates and credits to homeowners who install solar panels. They get a credit on their bill for solar energy they use, and a rebate for energy they send back to the power grid. Utilities are required to offer customers a green power option. Utilities must disclose their fuel mix to customers. Utilities must also comply with the state’s energy efficiency standard, which mandates demand reduction—which incentivizes rooftop solar.

Iowa has robust incentives for solar energy. Solar equipment is exempt from sales tax. The state runs a loan program for solar and other renewable equipment.

Solar can be installed in Iowa reasonably easily. Iowa has typical interconnection standards. However, Iowa’s solar easement regulations are not as strong as most states’; solar easements are not inherent property rights and may require local authorities’ authorization over the objections of neighbors. Residential and business solar generators are also eligible for tax credits based on how much energy they generate each year as part of the renewable energy tax credit. Business and residential solar energy installers are also eligible for a tax credit specific to solar. Iowa’s state development agency also offers loans for renewable energy projects. Also, renewable energy improvements are exempt from property tax.

In August 2016, a co-op utility in Urbana began construction on a utility-scale photovoltaic system that can generate 1.19 MW of energy.

In August 2016, Stuff Etc, a consignment store, announced plans to install rooftop solar systems at its stores in Iowa.

The first panels of largest solar energy project in the state—Central Iowa Power Cooperative’s 5-array project, went online in October 2016. CICPO flipped the switch on for 3,700 panels at a site in Urbana.

In June 2017, Iowa State University’s students revealed their newest solar car. The car is named Penumbra and is part of the PrlSUm program.

By August 2017, 21.1 acres in Dubuque will host Alliant’s first large scale solar project in Iowa. The project is expected to provide energy for about 727 homes, and will produce 5 MW of solar energy.

In March 2017, the solar garden in Prairie Lakes Park has more investors for solar power. The land was donated by Cedar Falls Utility, and produces 1.5 MW of solar energy.

iSETA is a statewide organization of solar energy businesses.

iRenew, the Iowa Renewable Energy Association, lobbies for pro-renewable and pro-solar policies and educates the public on their potential.

The Iowa Environmental Council lobbies for pro-renewable and pro-solar policies.