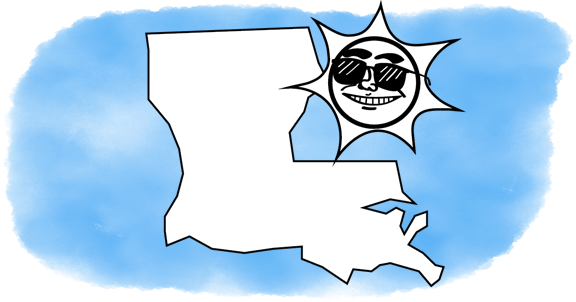 Going solar? Good call. It’s the right choice for your pocketbook and for the climate. If everyone in Louisiana used solar power, it would take 119 billion pounds of carbon out of the atmosphere every year—according to the EPA’s greenhouse gas calculator, that’s the equivalent of planting a forest that would cover all of the state.

Solar power is a growing part of the energy mix in Louisiana. Nationally, the state ranks #17 in solar energy use.

The biggest advantage of solar energy? The cost—$0. For the average Louisiana household, generating all their own electricity with solar would save $1,483/year. Also, you’re doing a favor for the next generation. Instead of relying on coal, natural gas, and nuclear plants, which produce most of Louisiana’s electricity, you’ll be producing your own clean, renewable energy. In Louisiana, residential customers like you account for 8.2% of the state’s total energy consumption.

The disadvantages: The cost of installation. The average solar installation costs around $20,000. Incentives like the U.S. Residential Renewable Energy Tax Credit can bring the overall cost down. Louisiana residents can get extra financing from the state’s Home Energy Loan Program, which offers loans up to $6,000 at 2% interest to fund energy efficiency projects.

The average Louisiana family uses 43,033 watts of energy on an average day. And, on average, they’ll get 4.75 hours of sweet Louisiana sun each day. So, to get enough energy to keep the power running all night, they’ll need their solar power array to generate 9,060 watts of energy per hour while the sun’s out.

To figure out exactly what you’d need based on where you live in Louisiana—and how much money you’d save—use this solar savings calculator:

Louisiana has minimal policy incentives for solar power. Louisiana is a major oil and natural gas producer; its many refineries make the state the #1 energy consumer on a per capita basis. Solar has made inroads in the state, but Louisiana could produce much more energy considering its sunny climate. Plus, a shift to renewables would reduce the state’s energy needs. However, Louisiana ended its solar tax credit in 2016.

Louisiana, despite an extensive study on the subject, chose not to pursue a renewable energy portfolio standard. Instead, the state decided to create a Renewable Energy Pilot Program that requires utilities to implement certain renewable policies and projects.

Like most states, Louisiana mandates net metering. Net metering gives solar producers (like homeowners with solar panels) money back on their energy bill for any solar power they send back to the grid, and credits them for energy they produce and use. Louisiana’s net metering provision is minimal: once net metered production meets .5% of a utility’s peak demand, the utility no longer has to offer net metering to interconnected producers.

Solar rights are inherent property rights with a few reasonable exceptions, like historic preservation districts. Louisiana’s interconnection policies are reasonable and comparable to those in other states.

In September 2016, Entergy New Orleans announced a successful pilot project of 4,200 solar panels in the city.

In March 2017, Abita Springs became the first municipality in Louisiana to commit to transitioning to renewable energy by 2030.

In 2017, the Alliance for Affordable Energy has been working with residents in New Orleans East to promote the use of solar panels with a leasing program that requires little to no initial cost.

By the end of 2017, West Monroe Waste Water Management Plant hopes to have 88 solar panels installed. The solar project would be placed on two and half acres of land.