You are here: Home / General / The Unconventional Harvest: Any City Can Be An Urban Oasis For Food [Book Excerpt] 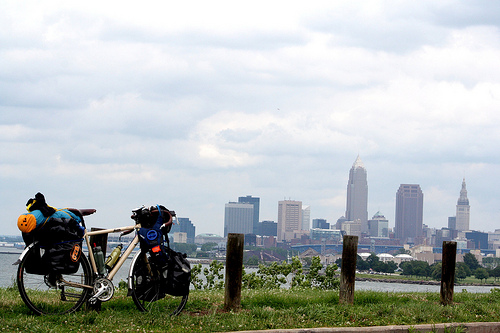 In the summer of 2009, Nathan Winters rode a bicycle across America to discover first-hand why our food system had grown to be unsustainable, and to find alternative solutions. He traveled into the homes and communities of organic, conventional, urban and Amish farmers and community organizers. The following is reprinted with permission from Cooking Up A Story, which publishes an ongoing series of selected material from Nathan’s soon-to-be-published book, The Unconventional Harvest.

Biking into Cleveland on Euclid Avenue from the east side of town was a jarring reminder of America’s racial and socioeconomic diversity. As I rode into the first urban environment of my bike route, young black men and women smoked weed and drank beers on the concrete front steps of row houses. Cars seemed dilapidated, yet functional. It was early afternoon and the intense heat reflected from the blacktop and burned my face. As hip-hop music blasted from parked cars and open apartment windows, the urban dwellers watched me on my bike as though I were an alien gliding out of the mother ship. One young man wearing a white tank top, a toothpick dangling loosely from his lips, sized me up from head to toe and said, “Damn, man, where you goin’ wit all dat shit?” (Except he didn’t call me “man”.) A city bus nearly grazed my left shoulder and shot a cloud of black exhaust into my face. I pedaled faster and answered, “Cleveland.”

Why would I choose to ride my bicycle into the concrete jungle? I wanted to get a close look at food production within the city limits. Urban- and community-based farming is growing in popularity at an exceptional rate. According to the National Gardening Association, the number of households with gardens jumped from 36 million in 2007 to 43 million in 2009 in the U.S. alone. The core tenet of backyard gardening: Whether you’re on a rural hillside in Vermont or an abandoned parking lot in Ohio, you can grow food on just about any square foot you can find. My curiosity piqued, I found myself at Gather ’Round Farm in downtown Cleveland, speaking with Meagen Kresge.

Gather ‘Round is so close to a Wendy’s you can almost hear the French fries squealing in the deep fryer. “I consider myself a world citizen and not an American citizen. Some people might get mad about that, but I stick to it,” said Meagen, urban farmer and founder of Gather ’Round Farm on Lorain Avenue on Cleveland’s west side. How does one woman turn an abandoned parking lot into a small farm? The first thing she did was build raised beds and establish fertility in the transplanted top soil. Her next step was gaining support from her local community. Soon the Cleveland Forestry Department donated surplus wood chips and the nearby Westside Market donated compost in the form of unsold produce. Meagen is shy, soft-spoken, and built without a mean bone in her body. I visited Gather ’Round in the middle of summer yet her skin was still fair and freckled. Her dark, curly hair was hidden by her big, flamboyant gardening hat. During our conversation we walked through a maze of raised beds teeming with abundant vegetables, from parsley, sweet peppers, kale, and beans to sweet corn. It was amazing. It was food. Meagen often giggled for no obvious reason as she colorfully rambled off-topic, leaving me both confused and entertained.
“What are you trying to accomplish with all of this?” I asked.

“We would like to move towards a permaculture model with the planting of perennials and small fruit trees. Long term, we would like to build a canopy layer, climbing layer, an herb layer, and a root layer,” Meagen said. That’s a lot of layers, I thought. “Before all of that we still have to get our soil base established.” Meagen flashed a big smile, then walked me over to a makeshift chicken coop. “We got these chickens to work as part of the system. Their manure is an excellent fertilizer and we sell the eggs based on an honor system right here on the street. In the city there are ongoing regulations in relation to raising chickens that have been challenging. Getting permits for building the chicken coops and just having the chickens here in general was quite a challenge.”

Permaculture, chickens, and an honor box full of eggs. This was not what I was expecting from an urban farm. I had envisioned a community garden with small plots assigned to registered members . Gather ’Round Farm was no run-of-the-mill community garden. It was a fully functional small-scale farm. It just happened to be on a downtown parking lot.

Admiring all of the work and the accomplishments that Meagen had under her belt I asked, “What was your biggest challenge when you decided to build this farm?” Meagen smiled, rolled her eyes a bit, and said, “Besides getting permits and complying with countless regulations, the other challenge is the work. It is work that we like to do, but we also have to survive financially and pay rent. The goal is to figure out how to sustain ourselves and sustain the farm. Ultimately, we would really like to move towards an educational program for children and adults with a garden space where anyone in the neighborhood can visit and learn something about growing food.” While Meagen’s chickens walked across her feet and perched on her shoulders, begging for attention, I noticed two young, black obese girls walking on the sidewalk past the farm. They were each shoveling golden French fries from a Wendy’s bag into their mouths and washing them down with a large soda.

As I watched those two kids eat what I consider dog food for humans, it occurred to me that not only is there a generation of Americans who do not know where their food comes from, but many in that generation don’t even know what real food is. Somehow as a society we have allowed the free market to undermine the well-being of our children with cheap food and clever, pervasive marketing.

According to a Centers for Disease Control and Prevention 2009 report, “1 in 3 Americans born in the United States in the year 2000 will develop diabetes during their lifetime”. “Among 12- to 19-year-old boys, the prevalence of obesity is higher among adolescent non-Hispanic African Americans (19%)”; girls from this same demographic group represent a 28% greater risk of obesity. In addition to the billions of dollars the fast food industry spends on marketing campaigns—inner-city environments, in particular—with the limited access to fresh and nutritious food, high poverty rates, and cheap abundance of fast food outlets, are left with a broken food system that is an incubator for developing chronic health disease afflicting millions of Americans.

When I made a comment to Meagen about the two young girls she reacted without emotion.“It bothers me to know that people in our society are used to eating food from fast-food restaurants,” she said. “As we work towards [the goal of] local food again, it makes it much more difficult for those of us who are growing food to get past the hurdles of ignorance. Knowing that people are malnourished because of the food that they are eating is sad.” Based on standards of living, and according to many economists, the United States ranks as one of the most affluent and educated countries. So why have we allowed something as simple as food to get so complicated? And what is the solution?

“We need to educate people so they know that an apple with a couple of spots is just as good to eat as a waxed and manicured apple from the supermarket. When people start to adjust to local food and farmers’ markets they are also going to have to adjust to the simple fact that food isn’t supposed to look like it does in the aisles at the store,” Meagen offered.

Meagen was honest but she was also unwilling to entertain the doom and gloom that surrounds our current industrial and decentralized food system. She was quick to avoid demonizing or ridiculing those on the “other side”. As much as I hated to admit it, the rhetoric from Gene Baur [at Farm Sanctuary] had inspired me to push buttons and create more sound bites from other real-food advocates. Meagen thought in sound bites, but she was not going to let them be recorded by my video camera or in my journal. Her approach to activism was simple. She was growing food for her community. Actions always speak louder than words.

Before I left Gather ’Round Farm, I asked Meagen, “Are you concerned for our future?”

Her voice was nearly mute when she responded. “I have concerns for future generations of children, animals, plants, and bugs. All of these things are valuable. We should ask people, ‘Have you ever felt any kind of care or concern for any child whatsoever?’ It is pretty simple to think about. The environment affects agriculture and agriculture affects food and food affects people’s well-being. We should try and think about what we can do to make things better and actions that would help assure that our future generations of children will be able to eat and have nutrition.”

As my conversation with Meagen neared its end, her connection to and warm compassion for something greater than the veggies growing in her raised beds was clear. Coincidentally, during my bike ride across the country, I was learning about and understanding what she meant when she said,

“I personally enjoy being connected to nature and in the woods and watching how a tree will lose its leaves and enrich the soil, allowing the natural environment to renew itself. Because I get so much joy out that, I think that our children could get that type of joy and satisfaction and be able to observe those natural environments. A lot of people are afraid of nature as opposed to being enriched by it; but nature and food go hand in hand.”