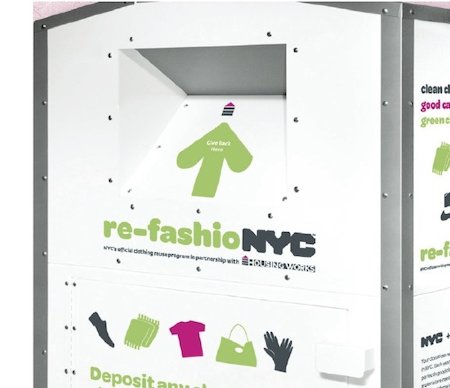 Of the 12.7 million tons of textiles created in 2009, the EPA estimates only 13.8 percent of textiles in clothing and footwear and 17.1 percent of items such as sheets and pillowcases was recovered for reuse or recycling.

Experts say that people are simply too busy to sort these items and deliver them to a thrift store or other organization that could put them to use. Tossing them in the trash is just more convenient.

With millions of people in need of clothing, shoes, and other textiles all around the world, it seems to that throwing these items away to rot in an overflowing landfill is a shameful waste.

To make it easier to donate used clothing and other textiles for recycling, New York City has embarked on a unique campaign: re-fashioNYC is a partnership between the City of New York and local charity Housing Works to make clothing donation as easy as possible through convenient in-building drop-off service.

To further encourage participation in the program, tax receipt forms are stashed at the bin so people can record and get credit for donations up to $250.

As Good points out, the program is very transparent about where donations and proceeds end up:

The city partnered on the initiative with Housing Works, a local organization that provides housing and other services for people living with AIDS and HIV. Housing Works funds its work in part through the social enterprises it runs—a used bookstore, a catering service, and seven thrift shops in the city. It’s Housing Works that provides the bin and deals with the clothing donations.

All donations dumped into re-fashioNYC bins go to a Housing Works warehouse in Queens, where they’re sorted. Some clothes go to Housing Works’ thrift shops or its “all-you-can-stuff” warehouse sales (both highly recommended!). The remainder, according to the city, go to a thrift shop in Haiti, other nonprofit thrift shops, or to resale and recycling markets in other countries. Profits from the sales are meant to cover the cost of the re-fashioNYC program; any additional profits go to Housing Works to fund their work.

Do you recycle your clothing when you’re done wearing it or do you throw it away? What are some creative ways to recycle textiles? Share your ideas in a comment!

How To Be A Savvy Yard Sale Shopper

Image via NYC Department of Sanitation.