You are here: Home / Homestead Living / Preparedness / In the Land of the Blind: Bird Box and Surviving without Sight 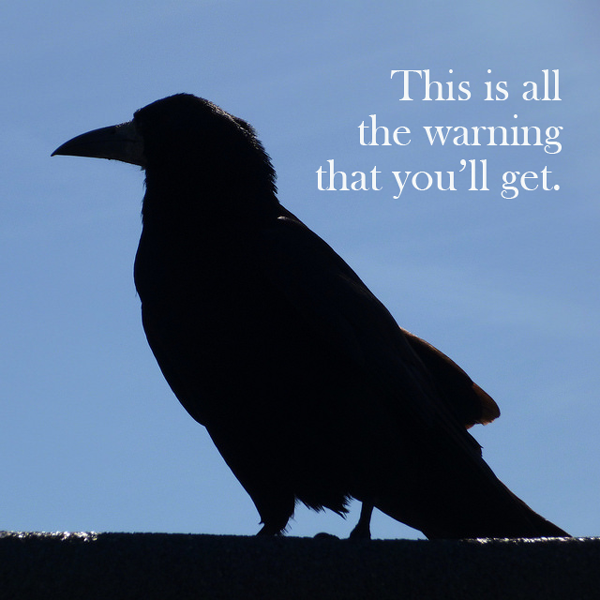 That is the premise of Bird Box

, a novel by Josh Malerman. In Bird Box, *something* is driving people insane, causing them to go into murderous rages that end only with gruesome suicides. That *something* is something that they’ve seen, and so the only safe thing is to keep one’s eyes closed, to keep oneself blindfolded when outside the safety of the well-fortified home.

Bird Box joins The Day of the Triffids and a ton of Harry Potter fanfics in the odd little sub-genre of disaster fiction that has blindness at its center. We like to imagine scenarios that let us feel the struggle for survival vicariously, and making things harder on ourselves is a great way to accomplish that. Instead of just having 99% of the global population die, let’s have them ALSO try to eat our brains! Instead of just having one supervolcano erupt, let’s also have this one erupt, and this one, and this one, too!

Instead of just having to survive alone in an abandoned city, let’s also have to do it blind!

Blindness is an especially powerful handicap to settle on the survivors, since (for us sighted people), that’s the sense that we rely on the most! It’s the one sense that we’d feel the most helpless without, especially in a life-or-death scenario.

It kind of makes you want to practice your bug-out drills with a blindfold on, doesn’t it?

Bird Box glosses over much of the harrowing slog that surely occurred in the constant struggle for food, but includes a crazy, crazy scene in which the main character, Malorie, DRIVES A CAR blind. I mean, you still gotta get places, you know? The most interesting consequence of the blindness, however, is the importance that Malorie learns to ascribe to listening. Seriously, this chick rigs her house out with mics and speakers to better aid her hearing.

Child-rearing also takes a hit in this post-Apocalyptic world of the blind. Apparently, you don’t get to practice attachment parenting in this particular scenario. Instead, you have to smack your babies with flyswatters to teach them to keep their eyes closed, and you have to train them into bat-like powers of hearing. This isn’t the first example that I’ve seen of training kids into preternatural powers in post-Apocalyptic fiction (it’s also present in Guillermo del Toro’s The Strain trilogy, but don’t bother to read it, because it sucks), but it remains weird. It calls back to the time before industrialization, when we needed kids because we needed those extra laboring bodies; here in Bird Box, Malorie again uses child labor, but this time to reverse the handicap of her enforced blindness.

Of course, even the existence of kids with bat ears isn’t all that one would require for coping in this newly sightless, slightly ominous world, and that’s why Malorie is eventually required to make her great escape to the kind of sanctuary where living blind has always been a way of life, and thus a matter of normalcy. Her struggle begs the question, however: could you make yourself cut off something integral to your body–sight, hearing, a limb–if that’s what was required for survival?

Better yet — could you make your kids do it?