You are here: Home / General / Free Money Day 2011: Would You Give Your Money To A Stranger? 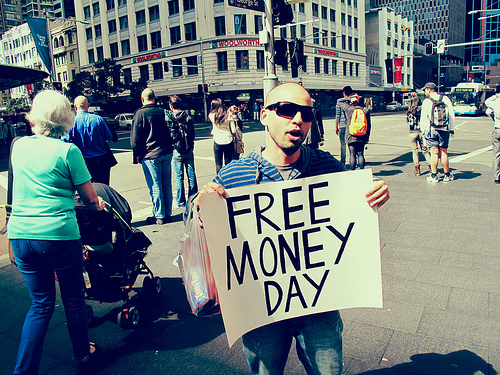 What’s your relationship with money? Do you have plenty? Do you have to scrape and save to get by? Do you spend every waking moment worrying about whether you have enough? Do you work 60-hour weeks just to feel like you’re keeping up?

Yesterday, September 15th, people all over the world took dramatic action to get people thinking about money’s place in their lives, and encourage them to start conversations about the benefits of alternative economies based on sharing.

To celebrate Free Money Day, members of the public handed out their own money to complete strangers, asking recipients to pass half the amount on to someone else. Sixty-one Free Money Day events occurred across 40 towns and cities around the world, from Lahore to Dubai, Buenos Aires and Tervuren, Belgium. Almost $3,000 of people’s own money was given away on the day. 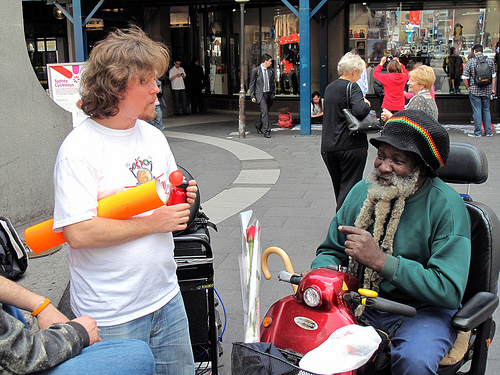 “Our relationship with money has become dysfunctional as it has become an end in itself. It’s time to rethink money and by the simple act of giving some away, we will start to reconnect with the original purpose of money: to connect ‘human gifts with human needs’. We have lost touch with the gifting aspect of money as our lives have become monetized. Free Money Day reclaims that spirit and shows us a different aspect of money. We can envisage money as an energy of abundance and not one of scarcity.” Raf Manji, Director, Sustento Institute (Christchurch, New Zealand), ex Senior Proprietary trader, Lehman Brothers.

When you hear someone talk about money, whether it’s your neighbor or the “experts” on television, they’re almost always talking about needing more, making more, or the need to spend more to make more.

But what if LESS MONEY was actually they way to move our economy forward?

Contrary to popular belief, economic activity in ‘pre-money’ times was not primarily based on bartering but based on ‘gift’ giving. In a gift economy, goods and services are exchanged without an agreement for rewards, either immediately or in the future. Widespread participation in the gift economy serves to circulate and redistribute valuable goods within a community.

Giving and sharing doesn’t deny people access and even ownership of the things that they need. What is does do is release us from the burden of traditional currency, both its pursuit and protection. It releases us from banks and credit cards that simply view our accounts as a means to a larger profit. Instead of putting us in a position to judge and be judged by our friends, it puts us in a position to reconnect with our neighbors by sharing what we don’t need and looking to the community to provide what we do.

Thousands of people around the world have been developing and using alternative currencies, such as Local Exchange Trading Systems (LETS) and TimeDollars or Time Banking. There are also many groups and individuals working on ‘open source’ currencies, and families who are choosing to spend less money, buy less stuff, and live well without money.