If you’re considering adding a bat house to your property, you likely already know the benefits of inviting these furry friends to your yard. Among their many positive qualities, the top three are their excellent pollinating abilities, their beneficial guano, and the fact that they eat mosquitoes by the thousands per day. Just one bat can eat up to 1,000 of them per hour!

When it comes to building your own bat house, there are a few key things to keep in mind, regardless of the size and style house you choose to make. Contrary to what you may have heard, or even seen, it’s a good idea to keep bat houses off of your actual house if you don’t want them to make their way inside.

As much as you may be bat-friendly, your house guests may find it disconcerting to hear them crawling inside your walls. You’ll also have better luck with bat occupancy if your bat house is near the top of an outbuilding or on a pole, rather than in a tree.

Another key thing to keep in mind is that your wood should never be treated with chemicals. This is key when using reclaimed wood especially. Always be certain that the wood is in its natural state. You can use plywood—however, you’re better off using a wood like cedar that will hold up over time.

Because bats prefer warmer temperatures (80-100 degrees Fahrenheit in the summer), put your bat house in an area with a lot of sun exposure where the house’s internal temperature will rise. Also, you’ll want to hang it at least 15 feet high so that it’s out of the range of predators, and ideally, close enough to a freshwater source so that the mothers don’t have to leave their babies for too long.

When considering which color to paint your bat house, it’s best not to choose something trendy or whimsical. There is good reason for avoiding personal preference in this case. Because bats prefer warmer temperatures, depending on where you live, the color of the house should ideally be one that helps retain heat. The further north you live, the darker your bat house should be. For those in North America, this map is helpful in telling you which colors are best.

Other than tackling a full-blown bat condo, building a bat house is generally a half-day project requiring basic skills and tools. In case you missed it, you can learn more about the benefits of having bat friends here. For free plans to build your own bat house, read on. 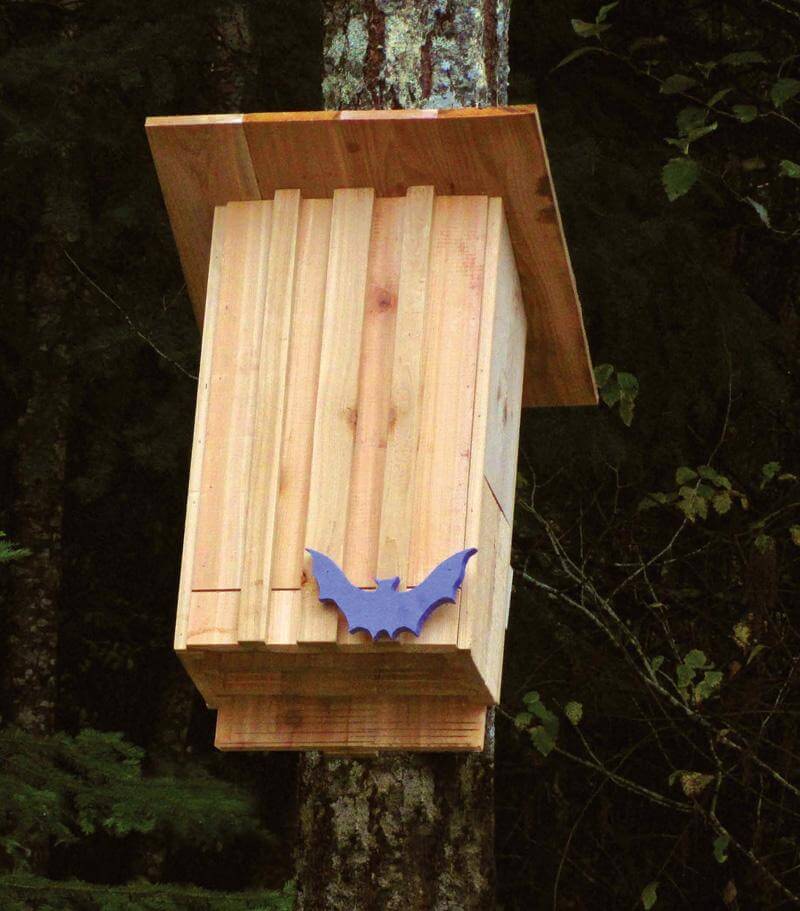 This is a good project if you’d like to craft a simple bat house for the first time or are only looking for a small bat house for your property. Invite your kids to join in on the fun.

Find the plans at Canadian Woodworking 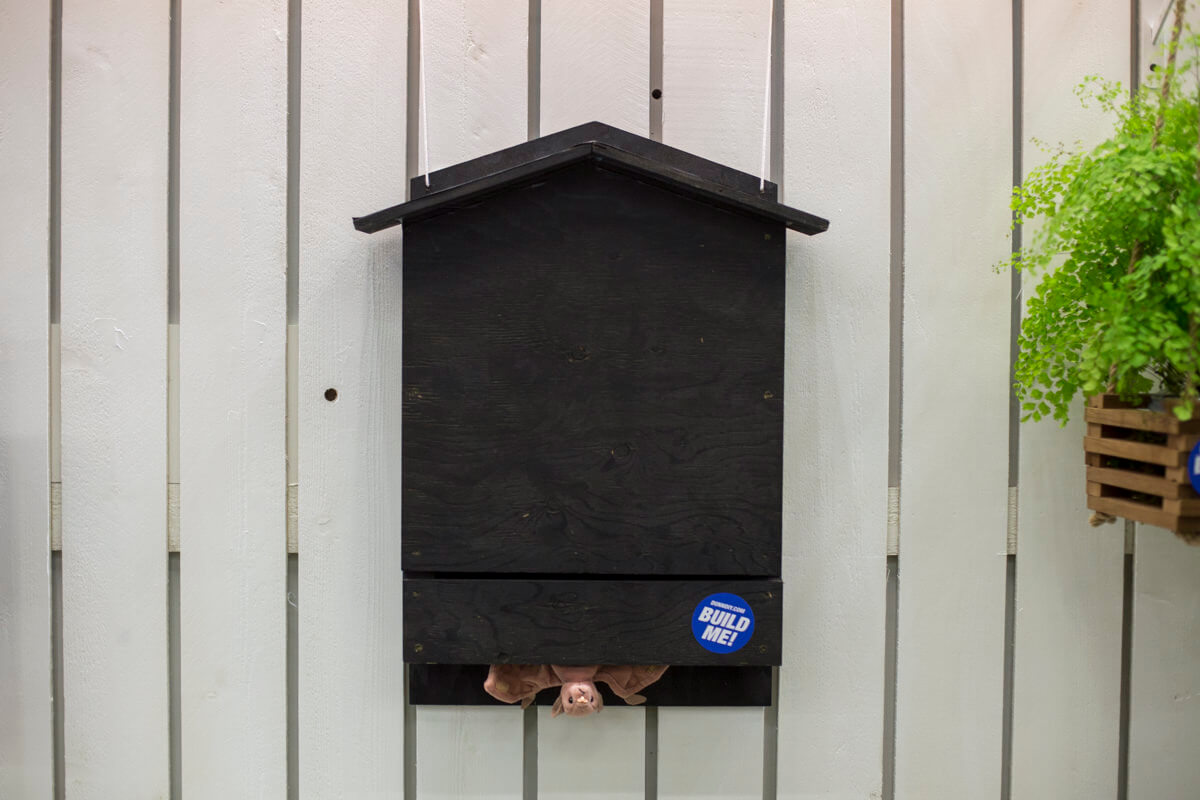 The further north you live, the darker you’re going to want to paint your bat house in order to keep the heat in. These plans call for plywood and black water-based spray paint.

Find the plans at Dunn DIY 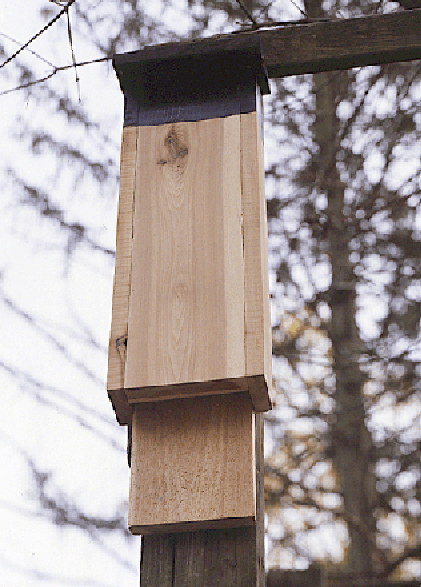 This one-section bat house is simple enough to make in just one day. Though small, it is mighty. This bat house can hold up to 50-75 bats.

Find the plans at Popular Woodworking 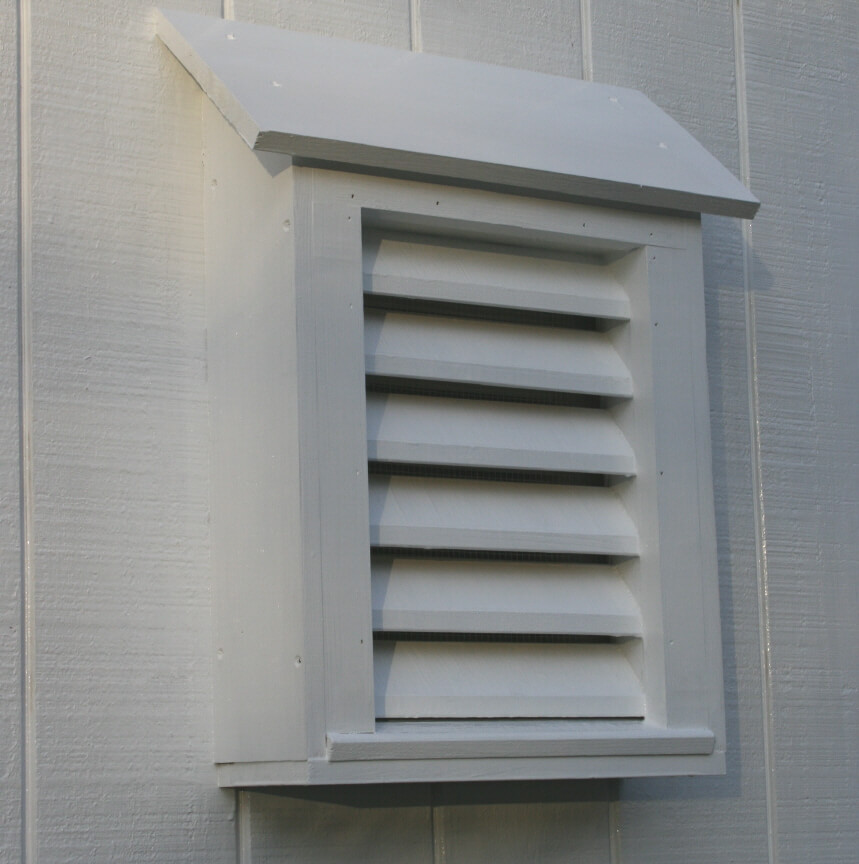 A clever way to install a bat house is to convert a gable vent and reinstall it. These plans walk you through exactly how to do just that. These gable vents are commonly seen in architecture in the American northeast. The most common size gable vents are 16″ by 20″, and these plans are matched to those specific measurements.

Find the plans at Bat Guys 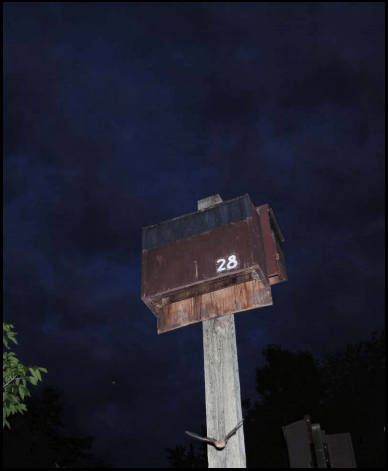 Find the plans at Wisconsin Department of Natural Resources 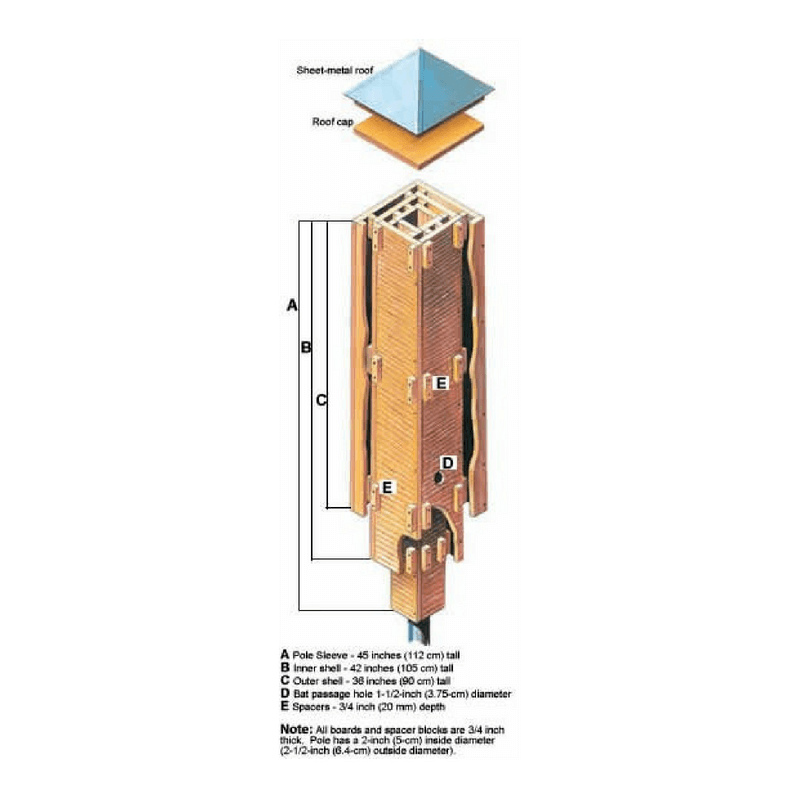 These bat houses, or “boxes,” are simple to build. The intention of this style of bat house is that it serves as both the landing area and the roosting surface. It’s important to remember that the inside surfaces of the wood should never be treated with chemicals.

Find the plans at Maryland Department of Natural Resources 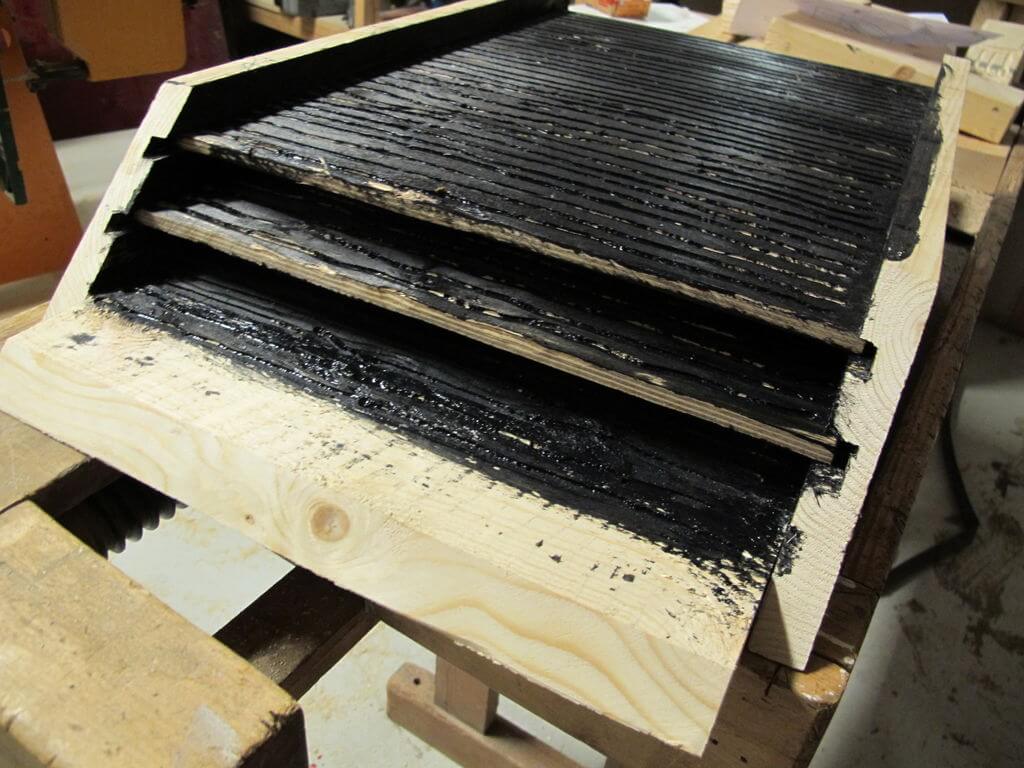 The plans for this triple-chamber bat house are a bit more complex. They include using a saw to score or groove the wood to create an interior surface that the bats can grab on to.

Find the plans at mercurska on Instructables

If you’re a bit more skilled at carpentry, you may decide to tackle a four-chamber bat house. As always, be sure to use untreated wood and remember to ensure that you’re painting the house the correct color for your geographical region. 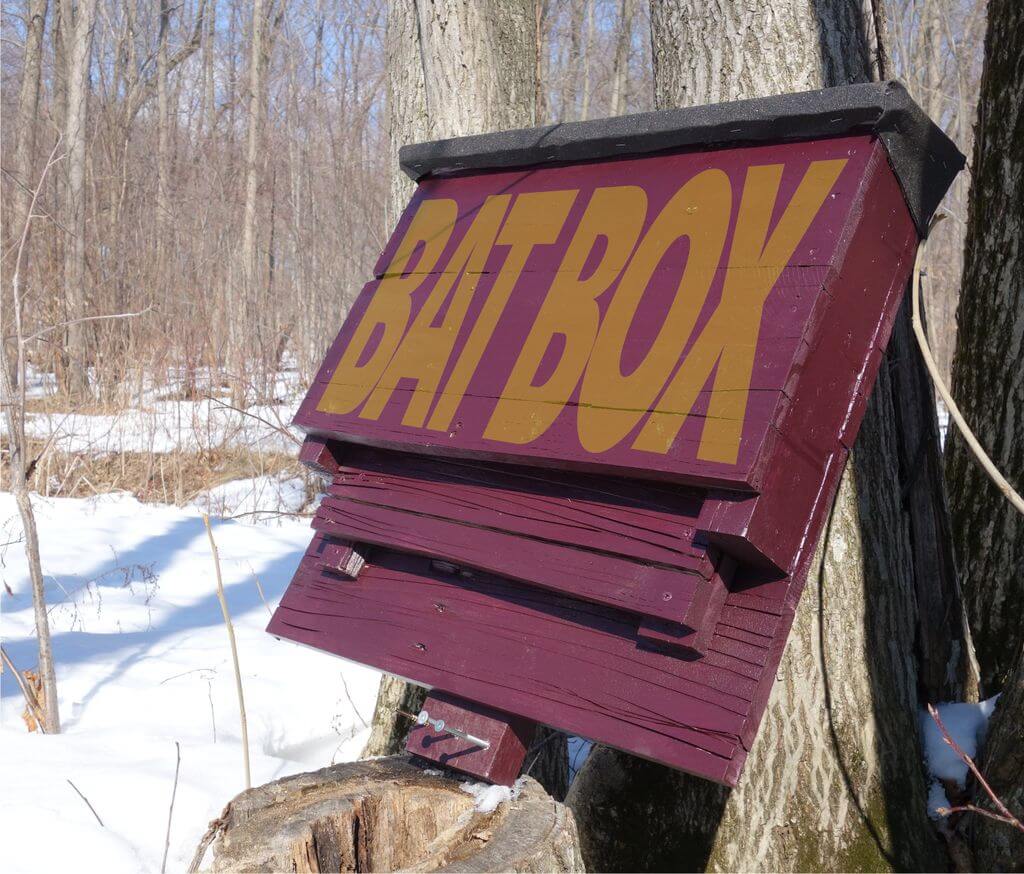 Reclaimed pallets are the seemingly never-ending source of wood projects. Just be careful that you are sure to remove all of the nails before you get started. Also, only use pallets that have been heat-treated and not chemically treated.

Find the plans at Renard_Bleu on Instructables 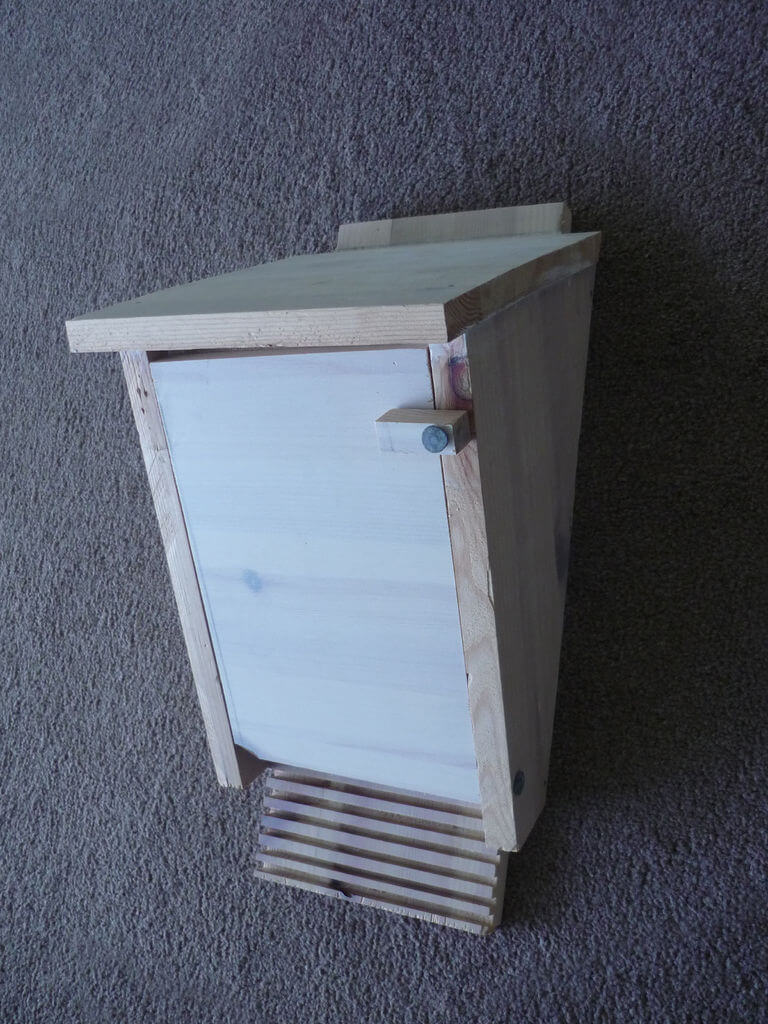 This garden bat box only takes about an hour to construct and is ideal for your garden spaces because they keep unwanted pests away from your zucchini while also supplying it with that highly prized bat guano.

Find the plans at crudworks on Instructables 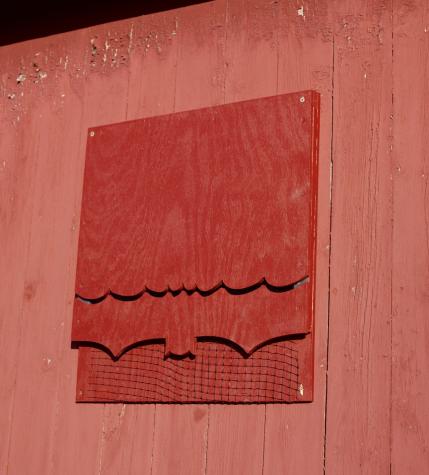 If you’re looking for a simple bat house project that you can make with your kids, this may be the perfect thing. These plans include the use of netting and a jigsaw to cut a bat design into the exterior wood.

Find the plans at This Old House 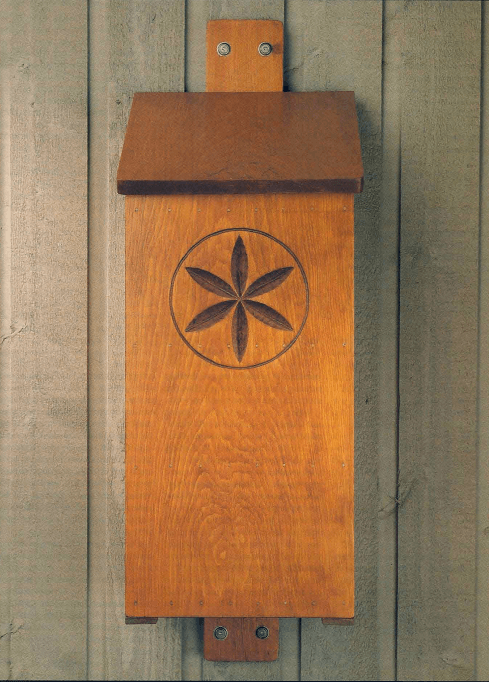 So, maybe you’re someone who prefers all things modern when it comes to the exterior of your home and when building your own bat house, you aim to continue that trend. This bat house is just the ticket. If you’re not terribly skilled at carving, you could leave the exterior alone or affix an emblem or decoration of your choosing. 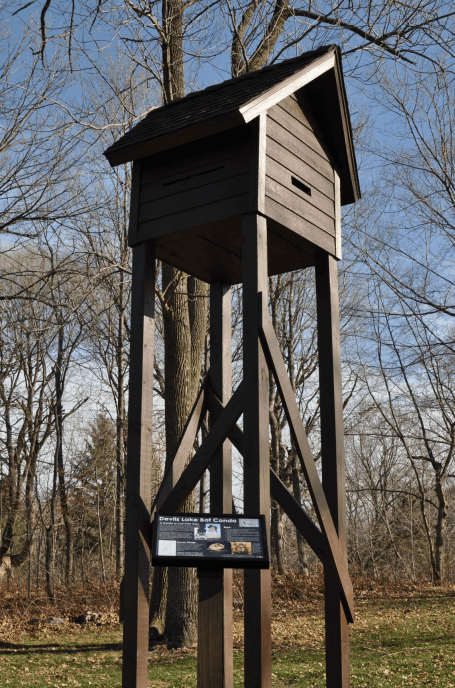 If you’re so inclined, you may decide to tackle the building of an entire bat condo. These structures can house up to 3,000 bats. Just be sure it’s a project you’re ready to invest in. The materials alone can run up to $1,500.

Find the plans at Wisconsin Department of Natural Resources 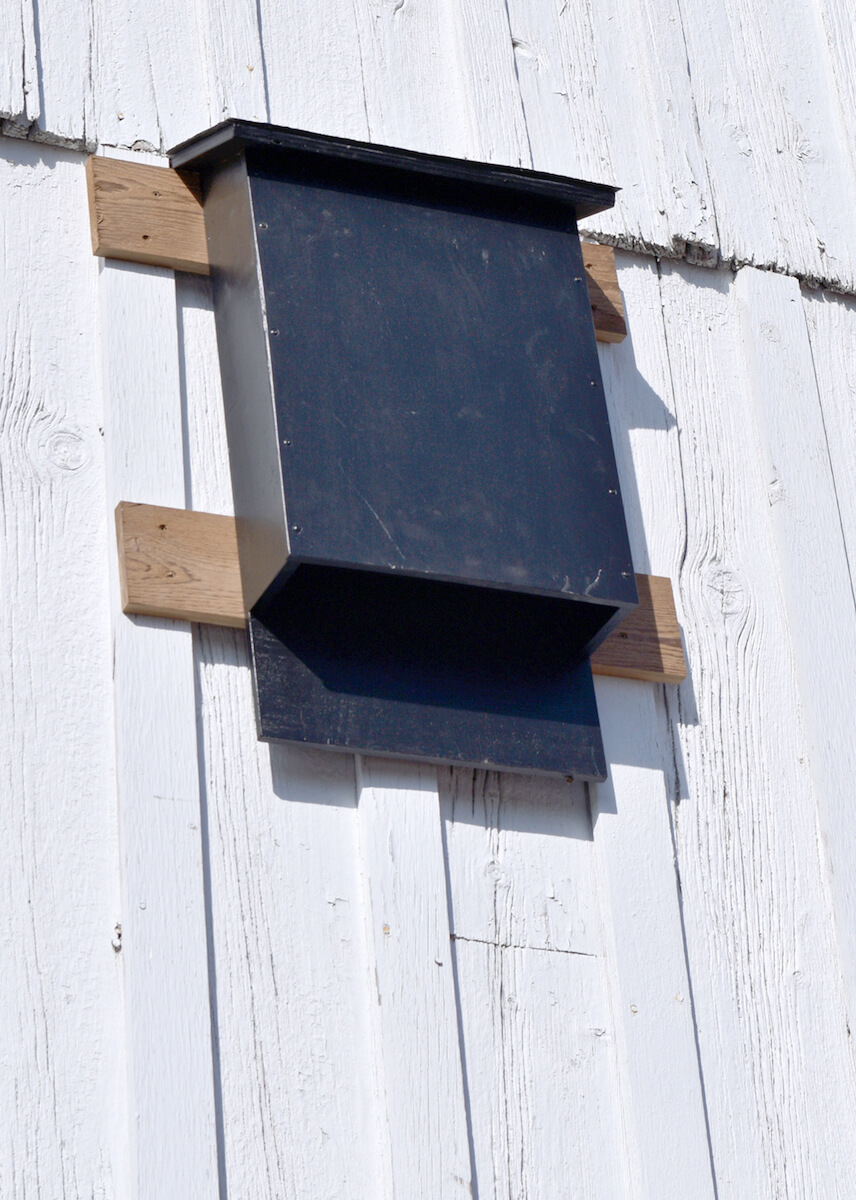 Admittedly, bats come with a reputation not everyone is crazy about. They’re associated with the dark and all things creepy. The fact that you’re a bat enthusiast may not thrill your friends and neighbors. This bat house can hide under the guise of a “mailbox” and shouldn’t raise too many eyebrows.

Find the plans at Woodworkers Guild Of America 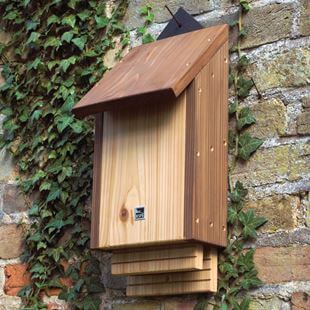 Okay, so someone may catch on to the fact that your mailbox is placed exceedingly high and in an unrealistic spot to have your mail delivered. You can then consider this option: a bat house crafted to look like a birdhouse. No one has to know that your “birdhouse” is actually home to hundreds of bat friends.

Find the plans at RSPB 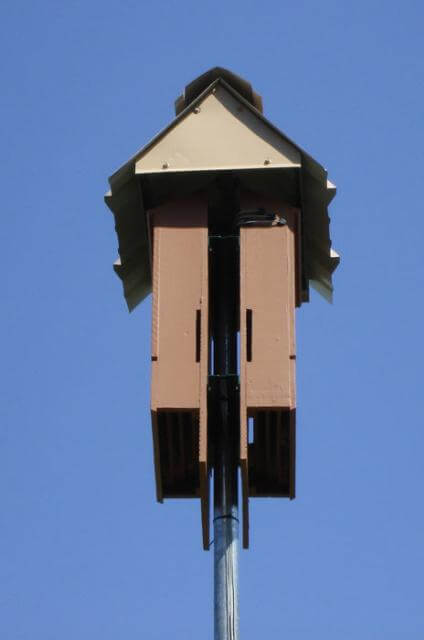 If you live in Florida, you may want to consider these bat plans. Because of Florida’s own unique ecosystem, several bat species live there year-round. These bat houses are ideal for keeping these critters content all year.

Find the plans at University Of Florida IFAS Extension 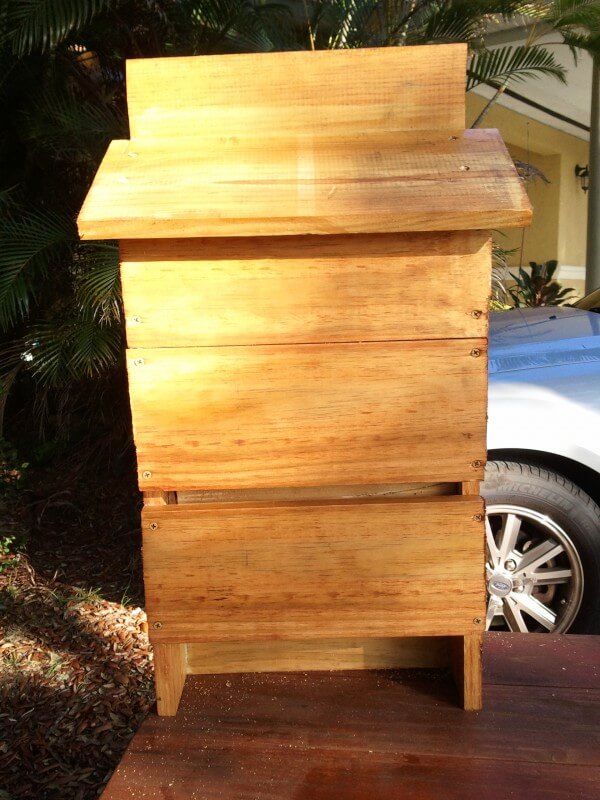 Don’t mistake the size of this bat house for the necessary skill level. Though it’s able to house several bats, it’s simple enough to make. Please note that though these plans suggest exterior stain to prolong the life of the wood, bats do not like the smell of stain, which can deter them from making a house their home. 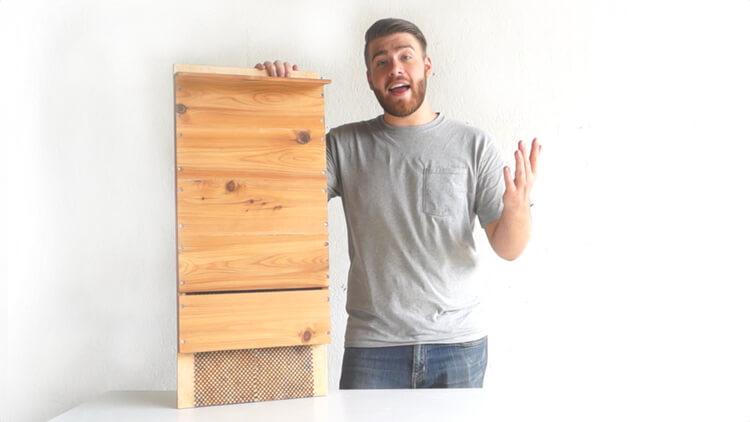 As with many bat houses, this one includes the use of a table saw. If you don’t own or have access to a table saw, you can also use a circular saw and a straight edge.

Find the plans at Modern Builds 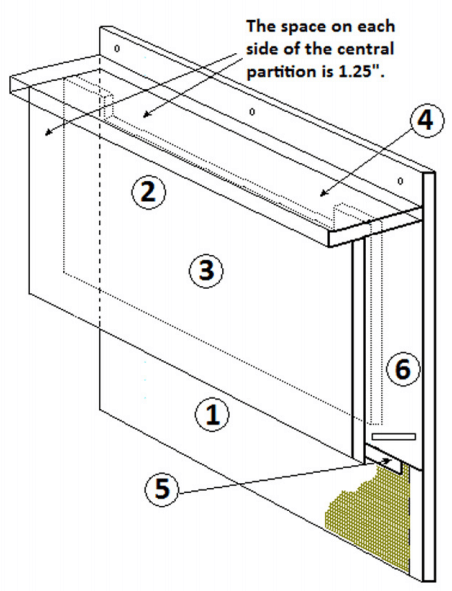 If you’re unsure that some plans will work for the size bat house you’re planning, consider plans such as this that make it easy to adjust based upon your needs. 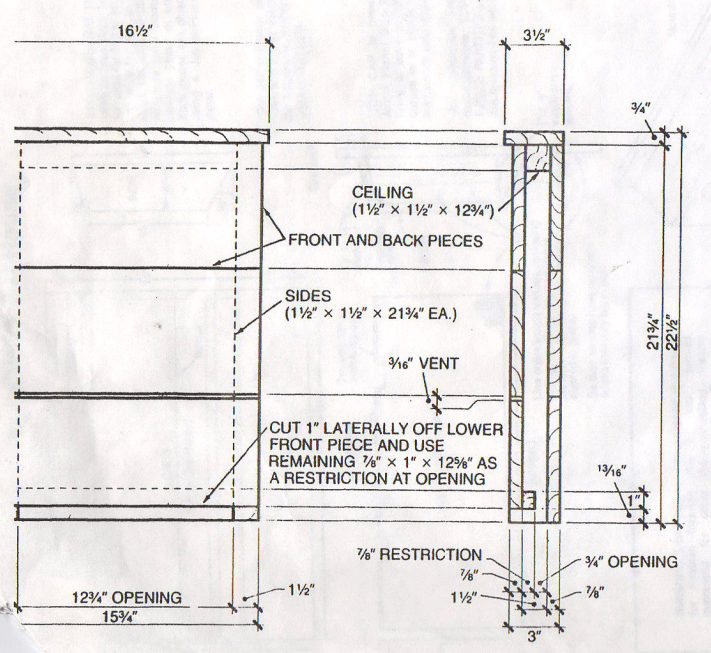 Want a bat house but are intimidated by building your first one or aren’t experienced with carpentry tools? No worries. These plans include only the use of a hand saw, hammer and staple gun, and you should be able to curate the materials for less than $10. 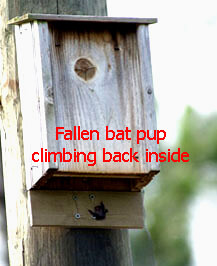 Believe it or not, building a pup catcher can actually save the lives of baby bats. Oftentimes, bat colonies become overheated and overcrowded, especially during the summer months, and baby bats fall out of their houses, unable to get back in. These pup catchers give them an assist and allow them to crawl back up to their mothers.