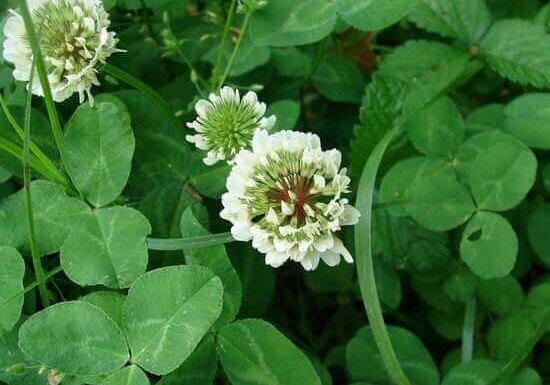 You are here: Home / Gardening / 6 Reasons Why I Chose Clover as a Living Mulch

I mentioned in my post about building raised beds that I chose to add New Zealand white clover to the edges of the raised bed to act as a living mulch.First off, I should explain what a living mulch is, and how it differs from a cover crop:

“In agriculture, a living mulch is a cover crop interplanted or undersown with a main crop, and intended to serve the purposes of a mulch, such as weed suppression and regulation of soil temperature. Living mulches grow for a long time with the main crops, whereas cover crops are incorporated into the soil or killed with herbicides.”  Definition from Wikipedia.

6 Reasons Why I Chose Clover as a Living Mulch:

So essentially, what I’m doing is allowing the clover to grow on the edges of my raised beds initially.  If it travels its way into the beds, that’s OK with me.  Here’s why:

(These 6 reasons are also a great example of the permaculture concept of stacking functions – more on that later.)

But Isn’t Clover a Weed?

I have had a few people ask me why I would add clover to a yard, because they thought it was a weed.  First off, clover is only a weed if your goal is 100% grass.  If that’s your goal, read this article on how to have a beautiful organic lawn.

I personally like the appearance of clover better than grass.  Clover does have aggressive tendencies: it spreads quickly, and can block out other growth.  My clover will be used in a place where it is surrounded by a wood chip pathway on one side, and a garden bed on the other.  If the clover gets into the garden bed, that’s OK with me.  I can always pull back the area of clover where I want a plant to be, and then plant.  In the meantime, all of the area covered with clover will be getting a dose of nitrogen and will be relatively protected from weeds.

Also, I mentioned in my post on raised beds that much of my current garden bed soil will eventually be moved around.  When that happens, the clover will get mixed in as a normal cover crop would, and will improve the soil then as well.

Doesn’t It Compete With Other Plants for Nutrients?

Yes, a little bit, but that’s OK. First off, I take good care of my soil with plenty of organic materials and other natural amendments throughout the year, so the soil shouldn’t be lacking for nutrients.  As mentioned above, if the clover ever gets in my way, I can just rip it out by the handful and whatever I’m planting will have plenty of space. Furthermore, I’m a firm believer that planting polycultures (many plants all grouped together) will always do better than monocultures (think big corn fields with nothing else growing).

The view under the canopy…!!! The clover is starting to fade by now cause the lack of sun light, blocked by the canopy. The clover with the leaves and branches that were cleaned from the ladies will make a layer of 'green manure' that will keep the soil with enough activity both fungae and bacterial to supply all our plants needs. Organic living soil. Close the cicle. #flowersoflifeorganicfarms #trinitygrown #inthepines #notill #livingsoil #livingmulch #lightdep #cootsmix

On a side note, here’s a good read about polycultures being more productive than monocultures from a recent study at the Virginia Institute of Marine Science:

“…analysis shows that plant communities with many different species are nearly 1.5 times more productive than those with only one species (such as a cornfield or carefully tended lawn), and ongoing research finds even stronger benefits of diversity when the various other important natural services of ecosystems are considered. Diverse communities are also more efficient at capturing nutrients, light, and other limiting resources.” (Source: ScienceDaily.com via Virginia Institute of Marine Science)

How to Plant the Clover:

I used a broadcast method (aka scattering the seeds) to add them to my raised bed walls.  If you use a broadcast method, be certain to do it (A) in your rainy season when the heat is gone or (B) cover it with a light layer of soil. If the seeds dry out or sit in the sun to bake, they won’t germinate well.  In my picture, you can see the seeds that fell into soil cracks were the only ones that performed well.

Where Did I Get This Idea?

There’s nothing new about it.  People have been using clover as a cover crop for a long time. Masanobu Fukuoka wrote extensively about using white clover specifically as a living mulch, so he gets full credit for what I’m doing.  Here’s a good article by permaculturalist Larry Korn (the man who translated Fukuoka’s book, The One-Straw Revolution, into English) about Fukuoka’s farming method.

Where Did I Get The Clover Seed?

I purchased 1 lb of it with my seed order at Territorial Seed Co. this year specifically for this purpose. The exact type I bought was New Zealand White Clover, which cost $11 per pound of seed.

Territorial Seed Description: Trifolium repens – Growing to only 8 inches, this low perennial clover has a growth habit similar to White Dutch Clover but will stand drought conditions better, is more vigorous, and tolerates a wide range of soils. Used for both a spring and fall cover crop, New Zealand White Clover can be sown between row plantings or as a solid seeded cover. A terrific green manure as it fixes up to 170 pounds of nitrogen per acre and attracts beneficial insects. Sow 1/4 pound per 1000 square feet; 6–10 pounds per acre. Pre-inoculated.

For More Information on White Clover: